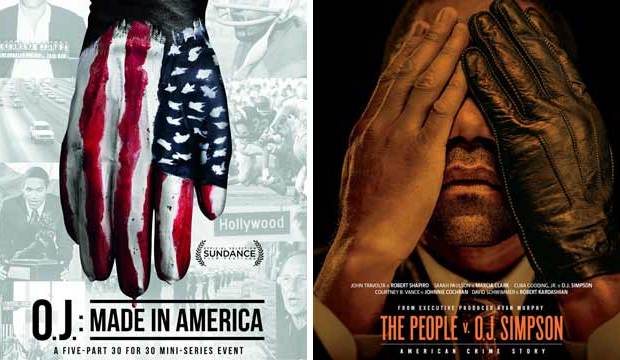 Courtesy of ESPN and FX

“O.J.: Made in America” is a five-part documentary that premieres on ABC on June 11 and will air its subsequent episodes on ESPN as part of the Emmy-winning “30 for 30” series. Ezra Feldman‘s documentary has gotten glowing reviews, scoring a whopping 95 on MetaCritic and 95% freshness on Rotten Tomatoes. Its June premiere means it won’t be eligible for Emmys until next year. However, it could give a boost during Emmy voting, which runs from June 13 to June 12, to FX’s docudrama “The People v. O.J. Simpson.”

Find out how ‘The People v. O.J. Simpson’ will fare at the Emmys — click here

“Made in America,” which clocks in at just under eight hours, tells the riveting story of O.J. Simpson‘s rise to football fame and then his descent into infamy after the murder of his ex-wife Nicole Brown and her friend Ronald Goldman and the trial that became a national media sensation — or debacle, depending on how you look at it.

Below, excepts from some of the rave reviews for “O.J.: Made in America”.

Dish ‘Made in America’ and ‘The People v. O.J. Simpson’ with Hollywood insiders in our famous forums — click here

A.O. Scott (New York Times): “For its part, ‘O.J.: Made in America,’ directed by Ezra Edelman, has the grandeur and authority of the best long-form nonfiction. If it were a book, it could sit on the shelf alongside ‘The Executioner’s Song’ by Norman Mailer and the great biographical works of Robert Caro.”

Jen Chaney (Vulture): “Practically every moment of its seven-and-a-half-hour running time is thought-provoking, astonishing, sobering, hilarious, tragic, and sometimes all of those at once.”

Dan Fienberg (Hollywood Reporter): “‘O.J.: Made in America’ is a provocative, intelligent and thorough documentary that tears along at an impressive clip given its length, with tragedy around every corner. The first miniseries to air under the ESPN Films and 30 for 30 banners, it also instantly takes its place among the banner’s best efforts.”

All 9 of Sarah Paulson's 'AHS' characters ranked worst to best, including Cordelia Foxx and Lana…

Sarah Paulson ('Mrs. America') on how funny Cate Blanchett is in real life: 'She's a goony-goon!'…