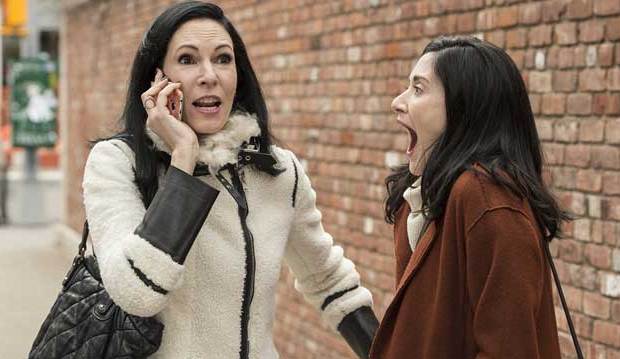 “I went in for this meeting with Bravo, and they were interested in talking to me about a reality show, but I just didn’t ever want to have a camera up my asshole. It’s just not my thing,” said Jill Kargman about the genesis of her comedy series “Odd Mom Out,” which premiered last summer and returns for its second season on June 20. She was in New York City on May 24 to discuss the series with producers Julie Rottenberg and Elisa Zuritsky at a Q&A Emmy FYC screening moderated by Meredith Vieira.

Since a Kargman reality show was off the table, Bravo instead adapted her novel “Momzillas,” about the treacherous world of Upper East Side mothers, and tapped Kargman as producer, writer and star. It’s a world she knows well: the novel and series are based on many of her own experiences.

“Jill Weber is sort of a version of me when I was a new mother,” said Kargman. “Now I’m forty-wonderful – it’s sort of me at 28. I think I was more insecure then about what I perceived to be these cliques of moms. I was alone and had no friends … It’s definitely a more insecure version of me. Now I don’t give a shit what people think.”

Even though “Odd Mom Out” is about a very specific world of Manhattanites, Kargman has found that it has universal appeal. She explained, “You could be in some red-state weird rectangle in the middle [of the country], and people have the same experiences because there’s a social hierarchy in their town. The metrics shift, but the game is the same, and moms compete.”

The series was also a welcome discovery for Rottenberg and Zuritsky, who cut their teeth as Emmy-nominated writers and producers of “Sex and the City” and had been searching for another project they could be as passionate about. And being able to freely tell stories about women’s friendships again made “Odd Mom Out” especially appealing.

Said Zuritsky, “Two years before we met Jill we wrote a pilot for a network … It was about a married couple and their kids, and she had a best friend. When they picked up that script, that best-friend relationship was a very strong component, and as soon as we began preparing to film it, it got chipped away. Male appeal became the focal point.”

Rottenberg added of that experience, “They were focus-grouping the edits, and they would come back and say, ‘The men are really tuning out [during the scenes between the women]’ … so by the end of that cut that friend, who was the original reason we wanted to do the show, became a very minor character.”

Now the three of them are surprised and delighted by the creative freedom they have at Bravo, though not quite all of their ideas have made it to air. “A lot of times because we have advertisers we have to gargle the balls of corporations,” said Kargman, who wanted to write an episode about an unpleasant experience at Disney World. “I wrote an essay about it because I couldn’t write an episode about it – my mom wouldn’t let me call it ‘Mousewitz.'”