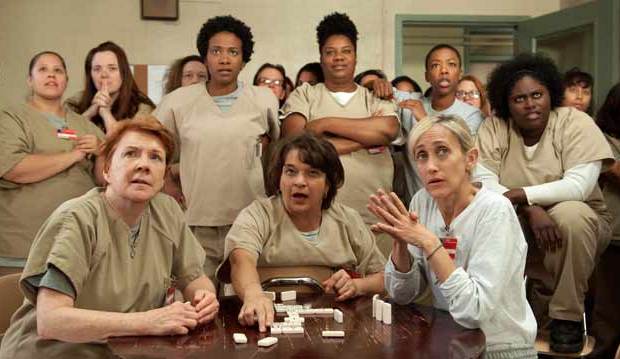 “Orange is the New Black” earned a 2016 Emmy nomination for Best Drama Casting — which is ironic since none of its cast were nominated for best acting. In fact, only one actor from the show’s sprawling ensemble has won to date: Uzo Aduba as Best Comedy Guest Actress in 2014, then Best Drama Supporting Actress in 2015 after the TV academy forced the show to switch genres. Several other cast members were nominated in the show’s first two seasons: Taylor Schilling as Best Comedy Actress (2014), Kate Mulgrew as Best Comedy Supporting Actress (2014), Laverne Cox and Natasha Lyonne as Best Comedy Guest Actress (2014) and Pablo Schreiber as Best Drama Guest Actor (2015). But there won’t be any new winners from the show this year. Its relative shortfall comes despite the fact that it has won Best Ensemble twice at the SAG Awards, where it still competes as a comedy.

But “Orange” fans should take heart. A number of other popular TV ensembles were underappreciated by the Emmys too.

Consider “Mad Men.” AMC’s prestige drama set in a 1960s ad agency won four straight Emmys for Best Drama Series (2008-2011), but it went almost to the very end without a single acting win. By the conclusion of its seven-season run, it racked up 37 performance noms and just one victory: Best Drama Actor for Jon Hamm for the show’s swan song in 2015.

“Arrested Development” won Best Comedy for its first season in 2004, but that didn’t translate to any love for its actors, who went 0-for-6 over the years, including another unsuccessful Comedy Actor bid for Jason Bateman for 2013’s Netflix revival.

Last spring, “Parks and Recreation” ended its run after seven seasons, but even though its farewell earned it a second Emmy nod for Best Comedy Series (it was previously nominated in 2011), the NBC series left the airwaves without love for most of its cast. Star Amy Poehler was nominated six times in a row for Best Comedy Actress, but leading man Adam Scott was never recognized, and neither were supporting standouts Nick Offerman, Chris Pratt, Rob Lowe, Aziz Ansari, Aubrey Plaza, Retta or Rashida Jones. Even the show’s guest actors were snubbed.

“Six Feet Under” never won Best Drama Series, but it was a three-time nominee, and it picked up a whopping 20 bids for acting, but those resulted in just two wins. Both victories were for guest actress Patricia Clarkson (2002, 2006), which means none of the show’s regular actors ever took home a trophy. Adding insult to injury: though no regular cast members prevailed, the show’s casting directors won – twice (2002, 2003).

But “Six Feet Under” only competed in four Emmy cycles, which is nothing compared to the 15 years “ER” was eligible for recognition. It was one of the biggest TV hits of the 1990s and won Best Drama Series in 1996, but despite an astounding 51 nominations across lead, supporting, and guest categories, it only won three acting prizes. Two of those were for guest actors (Sally Field in 2001, Ray Liotta in 2005), leaving only one for a regular cast member: Julianna Margulies, who won Drama Supporting Actress in the show’s very first year. That’s right, “ER’s” entire acting ensemble won fewer Emmys than Julia Louis-Dreyfus has done all by herself for “Veep.”

“Law & Order” was an NBC staple for 20 seasons, winning Best Drama in 1997 and picking up an impressive 17 nominations for acting. Alas, its only victory was a 1993 Drama Guest Actress prize for Elaine Stritch. In fact, no regular actor from a “Law & Order” series ever won an Emmy until Mariska Hargitay finally prevailed for “Law & Order: SVU” in 2006. She’s still the only one.

“The Larry Sanders Show” was a perennial Emmy nominee for Best Comedy Series (1993-1998), but its only acting win out of 23 nominations was Comedy Supporting Actor for Rip Torn in 1996.

“Barney Miller” finally won Best Comedy for its final season in 1982 and racked up 18 acting bids along the way, but was completely shut out of its performance races.

But at least “Barney Miller” won something. “Newhart” suffered one of the most notorious shutouts in Emmy history. Not only did it lose all 17 of its acting nominations, it never won an Emmy at all out of its 25 total bids, including two for Best Comedy (1983-1984).

Suddenly, “Orange is the New Black’s” track record doesn’t seem so bad, does it?

25 best married TV couples of all time, ranked, including 'The Office,' 'Modern Family,' 'This Is Us'…

Will 'Mrs. America' bring Uzo Aduba back to the SAG Awards?