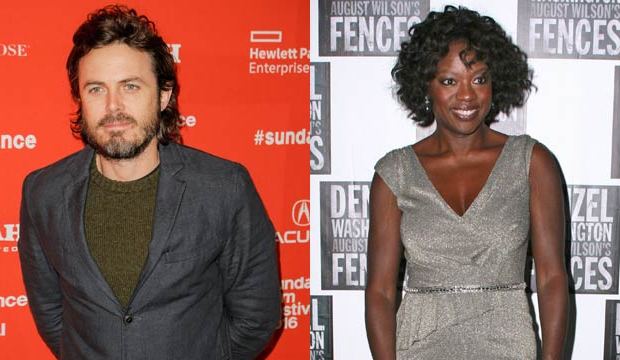 It may only be August, but Gold Derby’s experts derived from major media outlets already think they know what will win at the 2017 Oscars. And for “Manchester by the Sea,” things are looking quite good. This family drama about a man (Casey Affleck) who returns home after his brother’s death is predicted to win five trophies including Best Picture, according to the collective predictions of 16 experts.

“Manchester by the Sea” has a narrow lead (11/2 odds) to win Best Picture over romantic musical dramedy “La La Land” (7/1), whose director Damien Chazelle was nominated for writing the “Whiplash” script in 2014. “Manchester by the Sea” helmer Kenneth Lonergan has a slight edge (10/3) over Ang Lee (4/1) to win his first Best Director prize, but Lee is hoping to win #3 for visual war drama “Billy Lynn’s Long Halftime Walk” after previous victories for “Brokeback Mountain” (2005) and “Life of Pi” (2012). Chazelle, meanwhile, comes in third place for Best Director at 6/1 odds.

Currently ahead to win Best Actress is two-time past Oscar nominee Viola Davis (“Fences”), with 14/5 odds over “Loving” star Ruth Negga. Davis previously won the 2010 Tony for Best Play Actress for this same role. With an African-American actress and an Ethopian star in the #1 and #2 positions to claim Oscar gold, might the infamous #OscarsSoWhite fiasco be avoided this year after back-to-back ceremonies in which only white performers contended?

For Best Actor, Affleck takes the lead with 3/1 odds ahead of Davis’ “Fences” co-star Denzel Washington (7/2). It would be the second nomination for Affleck after “The Assassination of Jesse James by the Coward Robert Ford” (supporting, 2007) and the seventh bid for Washington, who’s already won a pair of Oscars for “Glory” (supporting, 1989) and “Training Day” (lead, 2001). “Fences,” which Washington also directed, adapts the Broadway story of a former African-American baseball player who now struggles to provide for his family.

As for the featured races, our experts forecast wins for “Manchester by the Sea” featured players: Michelle Williams (7/4) for Best Supporting Actress and Lucas Hedges (5/1) for Best Supporting Actor. Williams is a three-time nominee for “Brokeback Mountain” (supporting, 2005), “Blue Valentine” (lead, 2010) and “My Week with Marilyn” (lead, 2011), while 20-year-old Hedges would be enjoying his first Oscar nomination.

Hoping to take down Williams and Hedges in the supporting categories are Kristen Stewart (7/1) and Steve Martin (15/2), respectively. They both hail from “Billy Lynn’s Long Halftime Walk,” which tells the story of a war vet coming home. While neither has won a competitive Oscar, Martin did earn an Honorary Award in 2014 from the film academy and Stewart won a slew of critics’ prizes last year for “Clouds of Sils Maria.”

See each expert’s individual rankings right here. Here’s how the Best Picture predictions break down according to our pundits’ odds, and which experts are backing them: