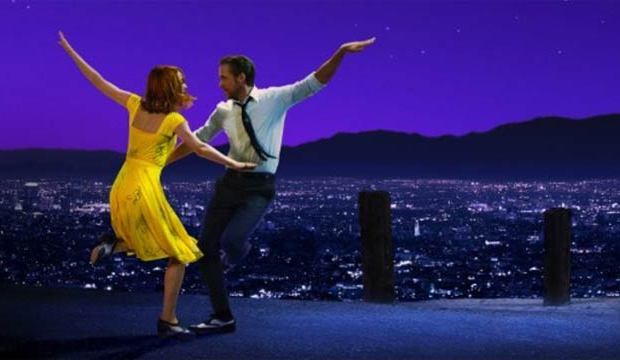 The battle to win Best Picture at the 2017 Oscars is a showdown between “La La Land,” “Manchester by the Sea,” and “Moonlight.” All three films have continued to be praised by critics and have been racking up nominations and wins at many awards events in recent weeks. They also remain on top of our latest Gold Derby rankings set by 27 Oscar Experts with their predictions. The top 15 contenders are now featured in our revised photo gallery (view above).

“La La Land” is in the lead position with 9/2 frontrunner odds and 22 Experts predicting a victory as Best Picture. The modern-day musical written and directed by Damien Chazelle stars Emma Stone and Ryan Gosling. Chazelle previously contended for writing “Whiplash” (2014).

“Manchester by the Sea” is in the second spot with 13/2 odds and five Experts predicting a Best Picture win. The drama about a janitor who must care for his nephew is written and directed by Kenneth Lonergan and stars Casey Affleck and Michelle Williams. Lonergan is a prior nominee for writing “You Can Count on Me” (2000) and “Gangs of New York” (2002).

“Moonlight” is in the third position with 7/1 odds. It is a drama told in three parts about a character seen as a boy, teen, and adult. The movie is directed by Barry Jenkins and stars Mahershala Ali and Naomie Harris. Jenkins is seeking his first Oscar bid.

“Fences” has 9/1 odds for fourth place. It is based on the Tony-winning play and is directed by Denzel Washington, a two-time Oscar winner for acting (“Glory,” 1989; “Training Day,” 2001). Washington stars along with Viola Davis.

“Lion” has climbed into our fifth position with 12/1 odds. Directed by Garth Davis, the movie is about a young boy from India who gets lost from his family and is adopted by an Australian couple. It stars Dev Patel and Nicole Kidman.

Tied with that film for fifth place is the sci-fi epic “Arrival,” directed by Denis Villeneuve. The plot has aliens landing on Earth and the military needs a linguistics expert to find out what they want. The movie stars Amy Adams and Jeremy Renner.