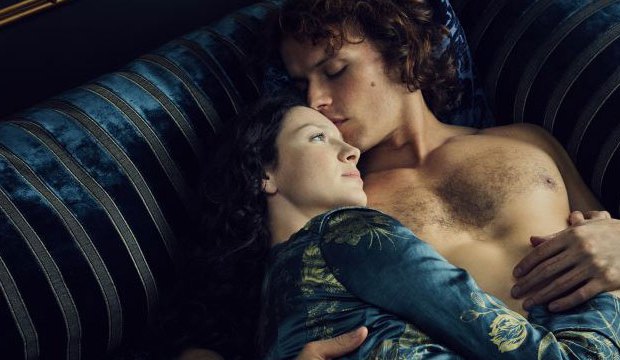 “Outlander” stars Sam Heughan and Caitriona Balfe as Highland warrior Jamie Fraser and time-traveling English nurse Claire Randall. She is transported from 1945 to the Scotland of 1743 and finds herself drawn into the Jacobite uprising. Based on the historical novels by Diana Gabaldon, this Starz drama series is one of the most romantic on TV today.

We’ve found 10 photos of the star-crossed lovers from the first half of the second season (see above). These seven episodes are centered on their journey to Paris and entry into the court of King Louis XV in the hope of stopping his support of the pretender Charles Stuart.

How ‘Outlander’ will do at the Emmys? – Click here

This sophomore season of “Outlander” is heating up just in time for Emmy voting in June. And it is already on the radar of TV academy members following a strong showing at the Golden Globes in January where it contended for Best Drama Series, Best Actress (Balfe) and Best Supporting Actor (Tobias Menzies).

After taking a tour of the photo gallery above, be sure to make your Emmy predictions right here. You’ll compete to win our contest prizes for best picks — $500 (first place), $300 (second place) and $200 (third place) in Amazon gift certificates — a place of honor on our leaderboard and a starring role in next year’s Top 24 Users (the two dozen folks who do the best predicting this year’s Emmy nominations). Be sure to read our contest rules.