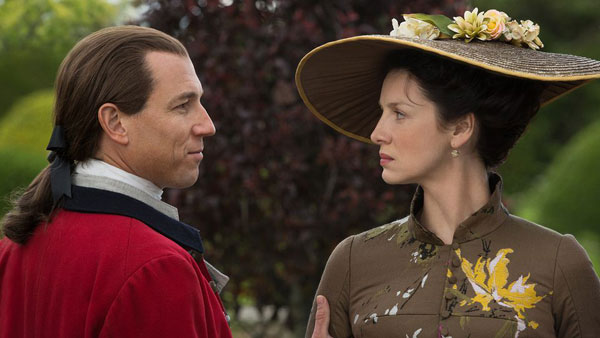 In this edition of their weekly “Outlander” recap (watch below), Gold Derby editor Rob Licuria and contributing writers Amanda Spears and Ted Stevenson dive head first into “Untimely Resurrection,” which features a much-anticipated reunion between Claire (Caitriona Balfe) and Jamie (Sam Heughan) and their nemesis Black Jack Randall (Tobias Menzies). We break down the plot twists, highlights, lowlights and Emmy prospects of this fifth episode in the sophomore season of the Starz period fantasy drama.

The episode climaxes at the Versailles gardens where Claire and Jamie run into Randall, who has not been seen since the dark and traumatic events that concluded last season. It was a welcome return of a character that many fans love to hate. “How damn good is he! I have been missing him since episode one,” Licuria opines on the return of the villainous Randall played by Menzies who also portrays Frank Randall of 1940s Scotland who we saw in the first episode of the second season.

“Before he even said a word, just watching him walk across that beautiful garden, I thought, ‘he’s back!, it’s about to hit the fan!” agrees Spears, before adding, “Menzies was great, he is what we’ve been missing these last few episodes.” Stevenson was also happy to see Black Jack Randall in a more compromising and humbled position when he meets King Louie and is forced to get down on his knees in humble deference. “It was really pleasing to see him get brought to his knees. God is he awful!”

Our panel also look ahead to potential awards recognition for the cast. “It’s going to be a really rough time for any of the ‘Outlander’ actors to get Emmy nominations,” Licuria notes. But they think Menzies could be a contender and suggest that the guest acting categories are rich with opportunities.

“Perhaps Stanley Weber as Saint Germain, the villain of the piece,” Licuria suggests. And he says, “Andrew Gower who plays Bonnie Prince Charlie. He’s doing such a great job. When he’s on the screen, I’m completely enraptured by him.” Stevenson agrees wholeheartedly, noting that this actor, “has done such a great job of crafting a character that you don’t love. It’s not always easy to do that. He’s a character that you care about; you feel bad about his situation.”

What do you think of the season so far? Post your comments below or join the discussion with other fervent “Outlander” fans in our feisty forums.