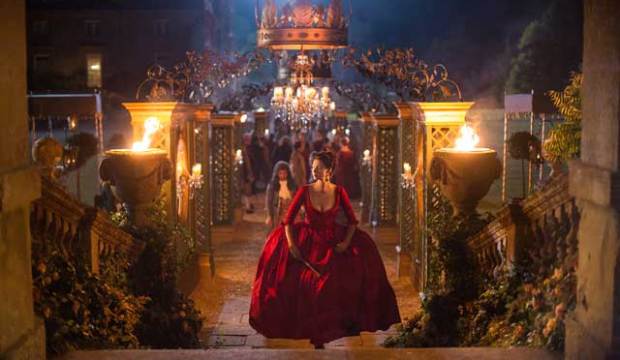 Ten thousand costumes had to be created for season two of “Outlander” as Claire (Caitriona Balfe) and Jamie (Sam Heughan) join the aristocratic intrigues of France during the reign of Louis XV.

“There’s no store that sells 18th Century fabrics, so we had to make them all,” costume designer Terry Dresbach tells Gold Derby editor Tom O’Neil. (Watch video below.) “It was a remarkable endeavor.”

Her ambitious accomplishment should impress Emmy voters, who gave her TV’s top award for “Carnivale” in 2004 just months after she won the Costume Designers Guild Award. This year she was nominated by the guild for “Outlander,” so that’s a good early omen for new Emmy notice.

Her latest work is loaded with lots of subtle winks that her sophisticated peers should pick up. For example, the clothing of Balfe curiously combines the aristocratic looks of 18th Century France with fashion common to Britain in the 1940s.

Join the fierce discussion of “Outlander” in our famous forums

“The heart of our story is about time travel,” Dresbach notes. “It’s about a woman from the Forties who travels back to the 18th Century, so we looked to what was happening in the 1940s. Interestingly enough, they were looking backwards to the 18th century.”

As a result, when Balfe appears on screen dressed ornately for a royal event at Versailles, her gowns “are reminiscent of the great designers of the 1940s,” Dresbach adds. Note, for example, how Balfe’s brilliant red dress above echoes the “New Look” of Christian Dior.