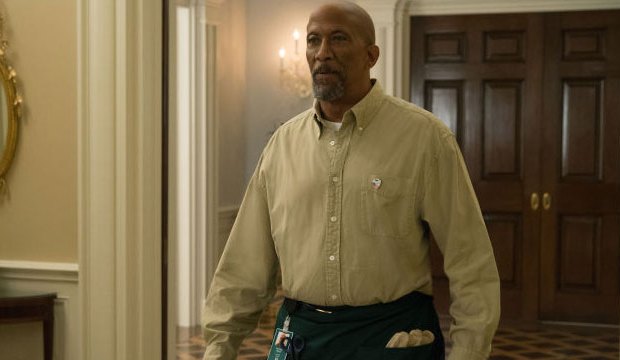 Last year’s Drama Guest Actor champ Reg E. Cathey is back in contention for his recurring role as Freddie, a close friend of President Frank Underwood (Kevin Spacey), on “House of Cards.” If Cathey prevails for the episode “Chapter 50,” he’ll be be only the second back-to-back winner after Charles S. Dutton (“The Practice” [2002] and “Without a Trace” [2003]), and the first to do so for playing the same character.

SYNOPSIS
After closing his BBQ restaurant, Freddie has worked his way up from gardener to florist at the White House. He informs Frank that he’s leaving to take a job at a Georgetown flower shop. The President suggests he serve up some of his signature ribs one last time. Freddie explodes, realizing he’ll always just be the help to his old friend, and storms out.

Later, “Washington Herald” editor-in-chief Tom Hammerschmidt (Boris McGiver) tracks Freddie down searching for information he may have overhead at his restaurant concerning the President. Freddie instead beats Tom up, claiming that no matter how much he may hate Frank, he’ll never snitch.

Can Cathey win for this episode? Let’s check out the pros and cons of him making Emmy history:

PROS
Cathey steals the show in his two brief yet memorable scenes, a textbook example of a great guest spot. Viewers no doubt cheered when Freddie gave Frank the talking-down he so rightfully deserves, and we suspect voters did too.

With the Emmys tending towards repeat winners, Cathey’s victory last year automatically makes him the front-runner this year.

Like many winners in this category, Cathey is an actor’s actor, amassing a list of TV credits including “The Wire” and “Oz,” and roles in such films as “Seven” and “St. Vincent.” Voters love to reward character players who hit it big after years of pounding the pavement, and he is certainly an example of that.

CONS
As we said, Cathey’s performance is comprised of two brief yet memorable scenes. Could he lose out to guest actors with more to do in their respective episodes?

Two of Cathey chief competitors are “House of Cards” co-stars Paul Sparks and Mahershala Ali, both of whom have more to do throughout the season as a whole. Could vote splitting, or simply the desire to reward someone new, throw the award to Max von Sydow (“Game of Thrones”), Hank Azaria (“Ray Donovan”), or Michael J. Fox (“The Good Wife”)?