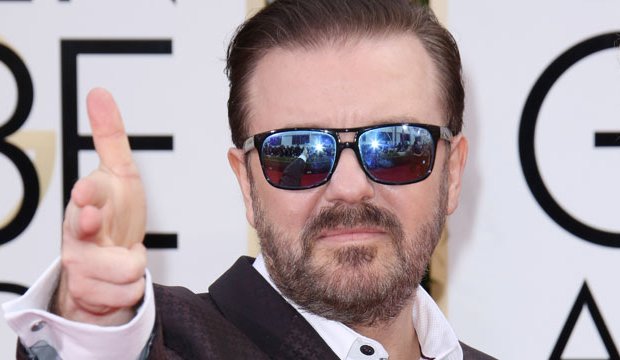 Hey, Ricky Gervais: Isn’t it time you got an awards show promotion by hosting next year’s Oscars ceremony? After four times at bat emceeing the Golden Globes (2010-12, 2016) and making it must-see viewing for NBC with your acerbic, take-no-prisoners attitude, fans have been clamoring for you to take on the ultimate hosting gig. Dish the Oscars with Hollywood insiders in our notorious forums by clicking here.

Just last year Gold Derby ran a poll asking who should host the Oscars and Gervais overwhelming won with more than 10,000 votes. To compare, second place was Robert Downey Jr. with only 3,000 votes. However, the producers of last year’s kudos — David Hill and Reginald Hudlin — ignored the fan outcry and decided to go with former host Chris Rock instead.

HOT FORUM TOPIC: How would you fix the Oscar ceremony?

Our own Daniel Montgomery noted in his review that Rock excelled with his “nuanced, biting and very funny observations” about the #OscarsSoWhite controversy. But now that that’s all behind us, it’s time for the Academy Awards to make a bold step forward and anoint a wildcard host who isn’t afraid to ruffle a few feathers.

Oscar producers last tried this strategy in 2013 when raunchy writer/entertainer Seth MacFarlane was invited to emcee the telecast, though he received mostly negative reviews. After years of trying to make the Oscars relevant again, inviting a cool cat like Gervais — who currently contends at the Emmy Awards for Netflix’s “Special Correspondents” — would be a step in the right direction. Academy, are you listening? The 89th Oscars will air Sunday, February 26, 2017 on ABC.

Will Gervais be nominated for the telefilm “Special Correspondents”? Be sure to make your Emmy predictions right here. You’ll compete to win our contest prizes for best picks — $500 (first place), $300 (second place) and $200 (third place) in Amazon gift certificates — a place of honor on our leaderboard and a starring role in next year’s Top 24 Users (the two dozen folks who do the best predicting this year’s Emmy nominations). Be sure to read our contest rules.