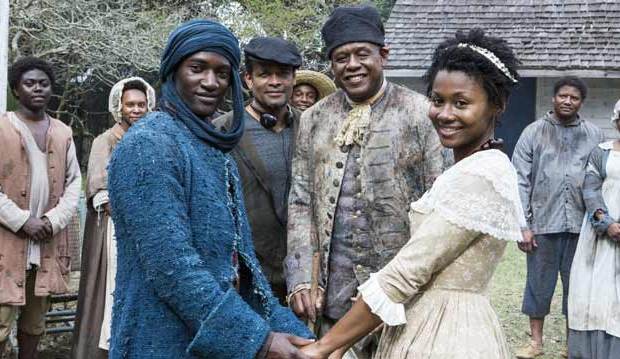 Will the History Channel’s new “Roots” miniseries, airing on four consecutive nights from May 30 to June 2, live up to the legacy of its predecessor? This story was originally told on ABC in 1977, when it broke ratings records and ruled the Emmys with 37 nominations and nine wins, including Best Limited Series. That’s a tough act to follow, but based on its rave reviews (scoring 81 on MetaCritic and 100% freshness on Rotten Tomatoes), it appears the new “Roots” strikes a chord much like the old one did. Read some of the reviews below.  Dish “Roots” with Hollywood insiders in our notorious forums by clicking here.

Maureen Ryan (Variety): “In this age of niche networks and splintered audiences, there’s no controversy in noting that the updated version of the iconic ‘Roots’ miniseries, simulcast May 30 on History, A&E, and Lifetime, is unlikely get the huge audience garnered by the original that aired on ABC nearly 40 years ago. Yet this new take on the saga should be viewed by as wide an audience as possible, from families to school kids to viewers interested in important chapters of the American saga. The lessons the new ‘Roots’ teaches over the course of its eight hours, which air on four consecutive nights, are worth revisiting, and a number of outstanding performances enliven this retelling of the story of Kunta Kinte and his descendants.”

Joshua Alston (The A.V. Club): “It’s to the credit of History Channel’s reimagining of Alex Haley’s ‘Roots’ that the most pointed criticism that can be made of it stems from general reboot fatigue. And that fatigue is justified. Must everything old be new again? Especially in the case of ‘Roots,’ which in its original 1977 miniseries form shattered television viewership records, dominated the Emmys, and illuminated the nation about the history and generational toll of the transatlantic slave trade. If ever there was a case for leaving well enough alone, ‘Roots’ should be it. But History’s new vision of ‘Roots’ justifies its existence almost immediately, reinforcing its worthiness through amazing performances and a tweaked narrative that puts more focus on the interior lives of the slaves.”

Willa Paskin (Slate): “Yes, the new ‘Roots,’ like any visual drama about slavery, exists in a sociocultural landscape that the original ‘Roots’ helped create—which is to say, a world in which slavery has been turned into thoughtful, dramatic television at least once. But once is just a start. We are so far from having had enough painful, stirring treatments of slavery, the fundamental fact of American history, that ‘Roots’ is nearly as necessary today as it was almost 40 years ago.”

Matt Zoller Seitz (Vulture): “The new ‘Roots’ is more passionate, more sweeping, considerably angrier, and more disgusted by the physical and moral atrocities it depicts. The violence is more graphic: The blood flows freely, and there are horror-film close-ups of acts that were shunted offscreen in the 1977 version; this might have been unbearable if the screenwriters (including the African-American writer Charles Murray) and the directors (two white, two black: Phillip Noyce and Bruce Beresford; Mario Van Peebles and Thomas Carter) didn’t make a point of centering the black experience, stressing the notion that Kunta and his descendants are displaced warriors whose pride is grounded in the survival instinct and making the entire story unfold within the context of displacement from Africa to North America.”