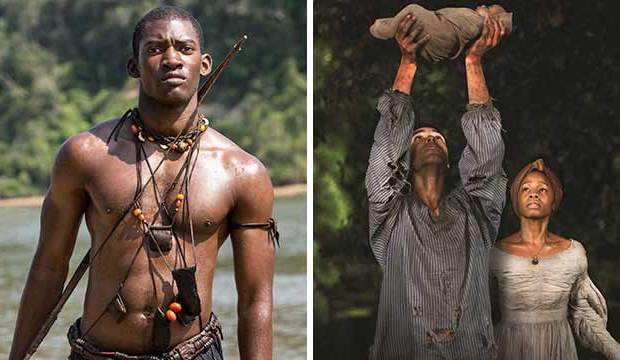 “Our history does not begin at slavery”: that’s the lesson actor Malachi Kirby wants viewers to take away from “Roots.” Kirby, who plays Kunta Kinte, previewed the first episode of the miniseries on April 21 at the Tribeca Film Festival along with co-stars Erica Tazel and Rege-Jean Page, costume designer Ruth Carter, and producers Mark Wolper and Will Packer. It airs over four consecutive nights on the History Channel starting on May 30.

“Most of the times I’ve seen Africans portrayed, they don’t look beautiful. They look depressed and poor,” Kirby added, so he was struck by the beauty and dignity of the continent as depicted in this miniseries. It was empowering “to know that that is my history … that it is respectable to come from Africa. It’s not less than being from London or America.”

Page agreed. “As someone who grew up in Africa,” he said, “often when we see ourselves portrayed on television, particularly by Americans, there’s a bit of a wry smile as I think, ‘Oh, that’s what you think we’re like?’ … so [seeing it depicted in a more authentic way] touched me now.”

“Roots” began 40 years ago as a novel by Alex Haley inspired by his own ancestry, including his family’s history as slaves in the US. The novel was then adapted into a landmark TV miniseries that was a ratings juggernaut in 1977 and ended up winning nine Emmys including Best Limited Series. It was produced by David L. Wolper, whose son Mark Wolper is a producer of the remake.

But Mark Wolper’s own son changed his mind. “I sat my 16-year-old son down – he was exactly the same age I was when my father made the original ‘Roots’ – and I said, ‘You need to watch what your grandfather did’ … When it was over he said, ‘I understand now why it’s important, but it’s like your music: it doesn’t speak to me.’ And I realized we had to do it then. It’s history, it’s part of America, it’s part of who we are. It’s a legacy that was given to me, not to avoid but to embrace.”

“It scared me to death,” said Packer, but like Wolper he thought it was important for a new generation to experience this story, especially young African-Americans: “I don’t think they know that they’re direct descendants of warriors in Africa who survived, who then were put on [slave ships] and had that passage and survived, and then were sold into slavery on American soil with all the atrocities that we saw and survived. They’re the descendants of the survivors.”

The cast had not actually seen the new “Roots” on-screen until the Tribeca preview. “My body is still shaking,” said Tazel in response to the first episode (she and Page don’t appear until episode three). “There are many representations of strong and resilient women throughout the miniseries,” she said, discussing the important female lineage in African-American history. “We are literally the physical carriers of the lineage that begins with Kunta and ends with Alex Haley.”