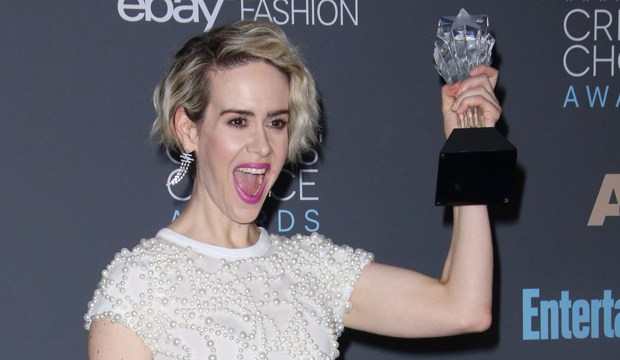 With her Best Movie/Limited Actress victory Sunday night for FX’s “The People v. O.J. Simpson,” Sarah Paulson ties Allison Janney for the most TV performance wins in the history of the Critics’ Choice Awards. Paulson and Janney have each won at three of the seven Critics’ Choice ceremonies that have recognized television programs and performances. Janney won Best Drama Guest Performer in 2014 (“Masters of Sex”), as well as Best Comedy Supporting Actress in both 2014 and 2015 (“Mom”).

For the “American Horror Story” franchise, Paulson won two Critics’ Choice trophies for Best Movie/Limited Supporting Actress. She first won in 2013 for playing investigative journalist Lana Winters in the “Hotel” season, then won again in 2015 for playing conjoined twins Bette and Dot Tattler in the “Freak Show” installment. She received a third nomination for playing ghost “Hypodermic” Sally McKenna in the “Hotel” cycle, but lost to Jean Smart of “Fargo” at the ceremony this past January.

Paulson won Sunday night for portraying real-life attorney Marcia Clark, a role for which she has received two other major accolades already. Besides winning her first Emmy Award in September on her sixth nomination, Paulson also prevailed at the Television Critics Association in August for Best Drama Individual Achievement. A gender-neutral category, she was nominated opposite her co-star Courtney B. Vance, who went on to win Best Movie/Limited Actor at the Emmys, as well as at this weekend’s Critics’ Choice Awards.

According to the aggregate predictions of Gold Derby’s Experts, Editors and Users, Paulson will not only score nominations this week from both the Golden Globes and Screen Actors Guild, but she’ll also receive her first trophies from each at their ceremonies next month, giving her a clean sweep of the five most-prestigious television acting awards for her “The People v. O.J. Simpson” role.

If true, Paulson would only be the fifth performer to achieve the feat, following Tina Fey (“30 Rock”), Julianna Margulies (“The Good Wife”), Claire Danes (“Homeland”) and Bryan Cranston (“Breaking Bad”). But she would be the first person to win the clean sweep for a limited series performance.

Film and television nominations for the 23rd Screen Actors Guild Awards will be announced on December 14 at 7 am PT/10 am ET, so be sure make your predictions before it is too late. Do you think that Oscar voters will be swayed by the results of 22nd Critics’ Choice Awards?  Log your Oscar predictions too and change them as often as you please until nominations are announced on January 24, 2017.

They're baaack! Tina Fey and Amy Poehler returning to host the 2021 Golden Globes

'Watchmen' reviews: Is HBO's adaptation 'the best new show of the fall' or full of 'messy hot…

Emmy episode analysis: Jessica Lange ('AHS: Apocalypse') is back as Constance Langdon in 'Return to…