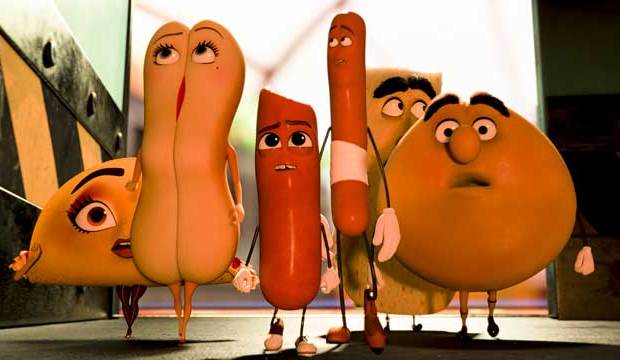 Can “Sausage Party” break ground at the Oscars by becoming the first foul-mouthed, R-rated animated feature film to win? It has received solid reviews, scoring 67 on MetaCritic and 83% freshness on Rotten Tomatoes, which indicates lots of admiration, though not as much outright adoration. It’s co-directed by Conrad Vernon (“Shrek 2,” “Madagascar 3”) and Greg Tiernan (“Thomas & Friends”) and co-written and produced by Seth Rogen, who also voices the lead character, Frank. But while the film employs much profane humor — even the title is a penis pun — the reviews also indicate surprisingly nuanced themes.

Have you seen “Sausage Party” yet? Check out some of its reviews below, then click here to discuss the film in our forums.

A.O. Scott (New York Times): “The first word uttered in ‘Sausage Party’ is a popular synonym for exrement, which is a bit counterintuitive. In a movie about food, you’d expect that to come at the end. But while the next 88 minutes supply plenty of scatology — including a blessedly discreet toilet-paper joke — this potty-mouthed movie has higher matters in mind. You will come for the kind of humor promised in the title and the well-earned R rating, but stay for the nuanced meditations on theology and faith.”

Edward Douglas (New York Daily News): “There are a few points where Rogen and company go way too far, but even in those cases, you may find yourself trying hard not to laugh and failing miserably. There are enough solid jokes that even if you don’t understand a few of them, you’ll still have fun. Frankly, ‘Sausage Party’ won’t be for everyone, but if nothing else, you’ll never look at your groceries the same way again.”

Leah Greenblatt (Entertainment Weekly): “Have you ever been screamed at by a weiner? Do you know what tomatoes talk about when they’re alone, or why that wad of gum needs its own tiny wheelchair? Welcome to the wildly crass, intermittently brilliant world of ‘Sausage Party’ — a sort of ‘Secret Life of Groceries’ exposé that is literally bananas. And also nuts.”

Jordan Hoffman (The Guardian): “There’s a lot that’s goofy in ‘Sausage Party,’ like when a doper on bath salts can suddenly see and hear the living food in his house, and a Stephen Hawking-inspired piece of chewed-up bubblegum, but there is (I swear) a richer message, too. This is a pro-reason, pro-knowledge story that is vehemently against the corruption found in organised religion, but not in a paint-the-word-“atheist”-across-your-chest-like-Ricky Gervais kind of way.”