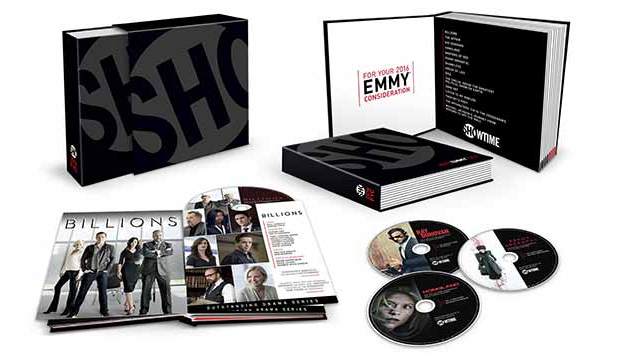 Premium network Showtime has just shipped its 2016 Emmy Awards FYC package this week, so voters should now be receiving the impressive DVD set. Gold Derby has an exclusive sneak peek look at the campaign mailer (see below).

Last year, the premium network scored major bids for comedies “Episodes,” “House of Lies,” “Nurse Jackie,” and “Shameless” (including winner Joan Cusack) plus dramas “Homeland” and “Ray Donovan.” Of those half dozen series, “Episodes” will not be eligible again until next year while “Nurse Jackie” concluded its run in 2015.

For this “For Your Consideration” package, 2016 comedies include holdovers “House of Lies” and “Shameless” plus rookie show “Dice” starring comic Andrew Dice Clay. Returning dramas are “The Affair,” “Homeland,” “Masters of Sex,” “Penny Dreadful,” and “Ray Donovan” along with newcomer “Billions” starring Paul Giamatti and Damian Lewis.

Click here for our full report last week on all of Showtime’s submissions in the lead, supporting, and guest star categories.