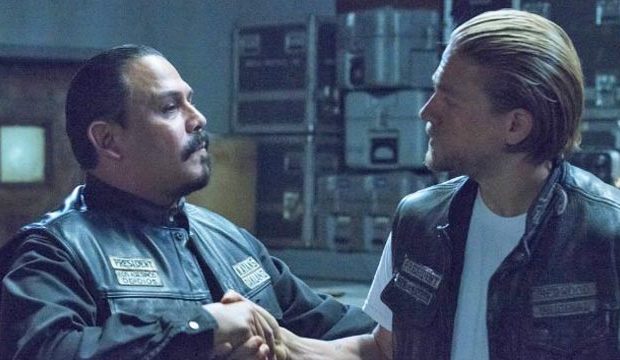 FX announced today that a pilot script for the long-awaited “Sons of Anarchy” spinoff, titled “Mayans MC,” has officially been ordered. Details are still scarce, but actor Emilio Rivera played Marcus Alvarez, president of the rival motorcycle gang, throughout the original series’ run and was last seen in the 2014 series finale being awarded the gun distribution rights from Jax (Charlie Hunnam). Do you think “Mayans MC” will be more of an Emmy Awards contender than its parent show? Sound off in the comments section below or right here in our famous TV forums.

“Sons” had an often tumultuous relationship with the Emmys over the course of its seven seasons on FX. It was never recognized for writing, directing or acting (including leads Hunnam and Katey Sagal) and only netted five total Emmy nominations: Best Main Title Theme Music (2009), Best Music and Lyrics for “Day Is Gone” (2014), Best Music and Lyrics for “Come Join the Murder” (2015), Best Stunt Coordination (2015) and Best Non-Prosthetic Makeup (2015).

What were the cruelest Emmy snubs ever: ‘The Walking Dead,’ Katey Sagal, Courteney Cox

Showrunner Kurt Sutter will co-create the spinoff series with new collaborator Elgin James, who Sutter says has a “strong, unique Latino voice” that fits the new world. “I didn’t think a white guy from Jersey should be writing about Latin culture and traditions. Elgin is that voice.” James last wrote and directed “Little Birds” (2011) and his next project is as a screenwriter for “Lowriders” (2016). Meanwhile, Sutter stayed with FX after the conclusion of “Sons” as the creator of the now-cancelled “The Bastard Executioner.”