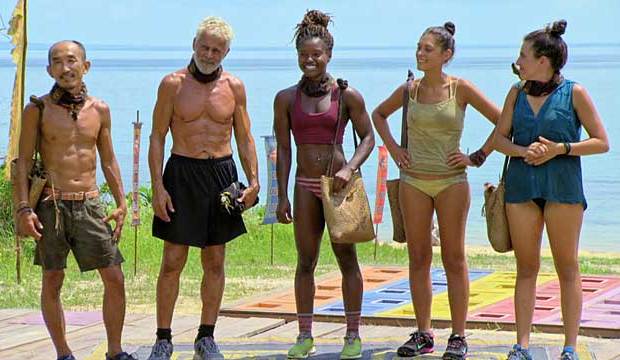 The finale of “Survivor: Kaoh Rong” is next week, but before the Final 5 is narrowed down to four let’s take a look at what angles each of them could possibly take in making their case to be named the sole survivor. To help illustrate each of their games so far, it makes sense to compare their style to a past winner — a reminder that if there’s one thing the 31 seasons have proved it’s that there are many styles of play. Take a look at my analysis below and let me know down in the comments section if you agree or disagree. Then be sure to vote in our poll on who you think will outwit, outplay and outlast the others to become the sole survivor.

Aubry Bracco — More than any of her competitors, Aubry’s game has been focused on keeping a core alliance together and putting that alliance’s needs ahead of her own. Case in point is her decision to vote with the alliance to oust Debbie Wanner, a move that in the end may have actually helped her long game. If Aubry makes it to the final tribal council a likely factor for a win will be this loyalty, while on the flip side the case could be made against her that without the decisions of others — like voting out Debbie — she wouldn’t have survived. On “Survivor: Tocantins” eventual winner J.T. Thomas played a similar game based on loyalty, but like Aubry was able to cut the liabilities of his alliance loose, sometimes indirectly, before they became a threat to his game. I don’t think Aubry can win a unanimous vote like J.T. did, but negative opinions of who she’s up against could lead to a landslide victory.

Cydney Gillon — If there are strong negative opinions against any of the potential finalists, they’ll most likely be directed at Cydney. Unlike Aubry, Cydney has played a poor social game. By routinely calling out others both at camp and during tribal council, as well as multiple alliance switches, she must have left sour tastes in the mouths of original tribe mates Scot Pollard and Kyle Jason. When it comes to past survivors with abrasive social games many runners-up come to mind, but two of the most notorious previous winners — Rob Mariano (“Redemption Island”) and Sandra Diaz-Twine (“Pearl Islands” and “Heroes vs. Villains”) — are also some of the most aggressive. In terms of strategy though, Cydney is most like Sandra, both of whom employed an “as long as it’s not me” style of play that focused on a day-by-day, vote-by-vote path through shifting alliances.

Joseph Del Campo — If Cydney will be remembered for an abrasive game, then Joe will be remembered for the exact opposite. It’s hard to talk about Joe’s strategy outside of what Aubry has (seemingly) decided for him — the two have been more or less joined at the hip since the beginning, with many other players commenting on the fact that wherever Aubry goes, Joe goes. If it was shaky at the start, this bond was solidified when Debbie was voted out, leaving Joe with no one to make his decisions except Aubry. In looking back on former winners, very few coattail riders have won the game, but when they have the key has always been being up against other finalists carrying a lot of negative baggage with the jury. Bob Crowley did not win “Survivor: Gabon” because he outwitted or outplayed the rest, he won because he outlasted a group of the most unlikable people to ever play. If you ask me, Joe can’t win because he’s already allowed all the villains to be voted out, but if he does it’ll be just as shocking and just as wrong as when Bob did.

Michele Fitzgerald — Michele was under the radar for the majority of the season — at the beginning it seemed as though Anna Khait was the power player in her alliance and when Anna was gone that role fell to Julia Sokolowski. It wasn’t until Michele allowed Julia to be voted out that she finally blossomed into a decision-making role of her own. In “Survivor: China,” eventual winner Todd Herzog began his journey in a similarly unassuming position and it wasn’t until the final weeks of play that his strategy really came into clear focus. Like Michele, Todd took parts of his main alliance and shifted it in a safer direction when he got rid of both Frosti and James. The key to Michele’s win will be whether or not she understands and can communicate to the jury the importance of Julia’s elimination in terms of her own game — something Todd was so impressive at doing.

Tai Trang — Of the five left, Tai’s game has been the most like a roller coaster. He started the game appearing to be the outsider looking in, but his surprising friendships first with Caleb Reynolds and second with Scot helped secure him the alliances he needed to stay. But it wasn’t until he secured himself a hidden idol and then knowledge of the super idol that he became the most threatening player in the game. Last season on “Survivor: Second Chance” eventual winner Jeremy Collins was in a season-long position of power because of his two idols. Jeremy also shifted alliances a number of times, but with much more grace than Tai has been able to accomplish which may ultimately lead to his downfall. The hiccup in Tai’s game is that his threat level has never been a secret, but if he makes it to the finals the case for him to win will be just as obvious as it was for Jeremy’s jury.

What should  'Joey Amazing' do to finally win 'Survivor'? Finding an idol couldn't hurt, say 32% of fans…