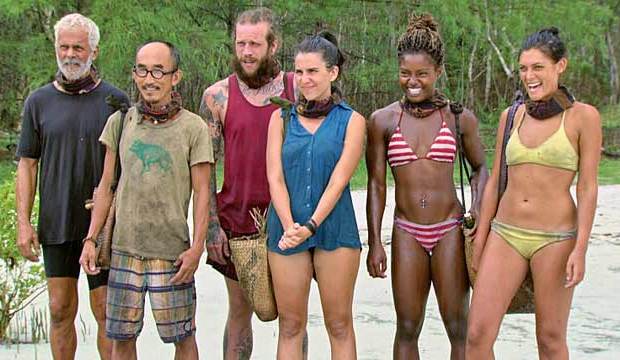 With only two weeks left before the “Survivor: Kaoh Rong” finale airs on CBS May 18, it’s time for YOU to have your say about who should win Season 32. (Take our new poll below.) The elimination of Julia Sokolowski last week leaves only six castaways still in the hunt for the $1 million. They are:

Aubry Bracco — On the off chance that Tai gets blindsided before the finale, we should expect Aubry to win the $1 million prize. She’s well-spoken, great at the social game, and even managed to swing Tai over to her side last week. It’s amazing to think that Aubry actually considered quitting back in Episode 1 when the heat got to be too much. What would this season have been without her?

Cydney Gillon — In a season built around Brawn, Brains and Beauty, Cydney possesses all three traits. Her smartest move by far was getting rid of the dead weight of Jason and Scot, however she didn’t necessarily do it in a way that might get them to turn around and vote for her to win in the finals. Thus, her biggest fault might be her social game.

Michele Fitzgerald — An early favorite to win, Michele has strangely been in the background for the past few weeks. But her spectacular victory in this week’s memory/puzzle Immunity challenge puts her back front and center. Does she have what it takes to squeak past Tai, Aubry and Cydney to pull off a surprise win?

Joseph Del Campo — Unfortunately for Joe, he’s by far receiving the worst edit of the season. With only six people left in Kaoh Rong, he’s had virtually no screen time and thus can’t win by “Survivor” standards. Joe is essentially an extra, and because of that the audience would be in an uproar if this ex-FBI agent took home the prize.

Kyle Jason — Despite earning more TV attention this season than anyone else other than Tai, Jason has virtually no chance to win the game. Even if he manages to beat the odds and survive to the Final 3, there’s no way he’ll earn more than one or two jury votes (from Scot and Julia). Thanks for playing, Jason. Better luck next time.

Tai Trang — America’s newest sweetheart had a rough go of things early in the game when his BFF Caleb was evacuated due to heat exhaustion. Tai has straddled both sides of the game since the merge, with his decision to turn on Scot being the best move of the season so far. He will easily win the jury vote, but will the other five castaways let him get that far knowing he has a hidden immunity idol and a secret advantage?

After voting in our “Survivor: Kaoh Rong” winner’s poll, be sure to sound off in the comments section below or right here in our reality TV forums.