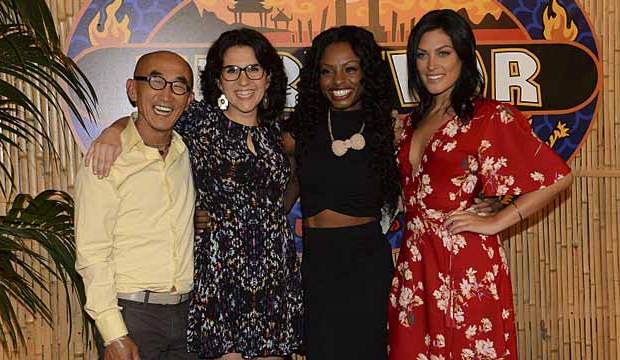 If you haven’t seen the season 32 finale of “Survivor,” STOP READING RIGHT HERE and come back later, but for the rest of you….

Congratulations to Michele Fitzgerald for winning “Survivor: Kaoh Rong” in a nailbiting finale that gave us a fire-making tie-breaker, a first-ever jury elimination and a tearful farewell to Mark the chicken. Scroll through our photo gallery above featuring 10 photos from CBS’s live reunion show.

Michele ended up winning with an overwhelming 5 votes from the jury, compared to 2 for runner-up Aubry Bracco and 0 for fan-favorite Tai Trang. In a twist, the eighth vote ended up not being cast, as Michele got to eliminate Neal Gottlieb from the jury after winning the final reward challenge. The fourth-place finisher was Cydney Gillon, who lost the aforementioned fire challenge against Aubrey in a tense standoff.

During the fun reunion show, host Jeff Probst was interrupted on live television by none other than pop artist — and “Survivor” super fan — Sia. She was so inspired by Tai’s love for animals that she decided to give him $50,000, as well as award an additional $50,000 to his favorite animal charity. Probst then chatted with Drew Carey about the upcoming “Survivor”-themed episode of “The Price is Right,” airing May 23 on CBS.