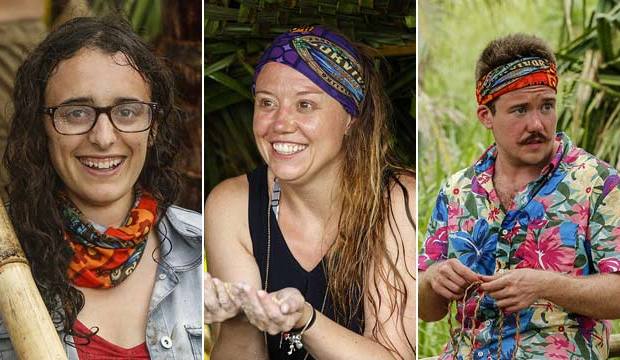 As is always the case in reality competition shows, first impressions will make or break a contestant’s run for the win. This week “Survivor: Millennials vs. Gen X” premiered and we’re already handicapping the three MOST likely castaways to win. Agree or disagree with our below assessment? Let us know in the comments section and be sure to make your “Survivor” predictions for a chance to top our famous leaderboards. It’s fun and easy, so start now by predicting who will be eliminated next.

Hannah Shapiro – Millennials tribe
Honestly it’s hard to choose between Hannah and tribe mate Mari Takahashi here because they essentially joined forces to achieve the same goal — assembling the “misfits” to counter the obvious alliance of the “cool kids.” But Hannah stands a cut above Mari for branching out and also building a bond with semi-cool kid Jessica Figueroa in the process. Because the Millennials won the first immunity we have yet to see how the tribe will divide when it comes to voting, but Hannah’s already shown an awareness of wanting to have an ally on both sides.

Jessica Lewis – Gen X tribe
Look beyond the gnarly bacterial infection in her eye and you’ll see a shrewd bit of gameplay on the part of Jessica. Grabbing a clue in the middle of literally everyone as she did at the start of Day 1 is no easy feat, but also knowing to keep the information contained within — a new Legacy Advantage — is where the real smarts comes into play. Jessica appears to be holding her cards close to her chest while also building an overwhelming voting block subdivided into a stronger core alliance with the two strongest guys on her tribe.

Zeke Smith – Millennials tribe
Every season we talk about the “winner’s edit” and the premiere is a great place to get a sense of who the producers might be leaning toward for the season. So far it looks like our best candidate is Zeke. Not only did Zeke get a wealth of camera time in confessionals, but his initial discomfort as a player on a millennials tribe that he doesn’t necessarily think he belongs on was later balanced with an endearing moment of personal achievement when he started fire. I imagine the glaring gap in maturity level between Zeke and the rest of his tribe will become an issue at some point, but it feels like it’s going to lean in Zeke’s favor and he’ll be safe for a while as the clear leader of the tribe.

Gold Derby readers just like YOU often turn out to be our smartest prognosticators, so it’s important that you give us your predictions. You can continue to update and change your forecasts throughout the week, just click “Save” when you’ve settled on your choices. You’ll compete to win bragging rights and a place of honor on our leaderboard. Be sure to read our contest rules and sound off on this season of “Survivor” in our reality TV forum.

'Survivor: Game Changers': Do you agree with Andrea Boehlke there's a 'dark cloud' surrounding this…

Andrea Boehlke 'Survivor 34' exit interview: 'One of my flaws' was not being aware I was a threat…

'Survivor' Season 34 leaderboard: What's YOUR score after 'Reinventing How This Game Is…

'Survivor: Game Changers' episode 11 preview: Who is 'Reinventing How This Game Is Played'…