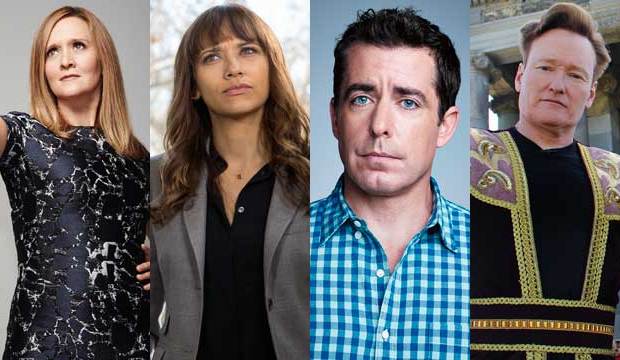 “I came to TBS in 2010, and there was this period of time where we felt a little bit alone,” said Emmy-winner Conan O’Brien (“Conan”) at an event on May 17 promoting TBS’s expanding comedy lineup to Emmy voters in New York City. “I have been really blown away lately by the quality of the people that they’ve brought to the network, and there’s an exciting feeling of, ‘Something’s happening in this place.'”

Joining O’Brien on TBS’s roster are Rashida Jones in the police procedural spoof “Angie Tribeca,” Samantha Bee in the feminist commentary series “Full Frontal” and Bee’s husband Jason Jones in the ribald road-trip comedy “The Detour.” The discussed their shows during a Q&A moderated by CNN’s Jake Tapper.

“Full Frontal” has the highest profile of the network’s new offerings, especially thanks to the chaotic election year. Bee, a former “Daily Show” correspondent, has brought her political sensibilities to a comedy landscape mostly dominated by men. “The one thing that I was really given the opportunity to do [at ‘The Daily Show’] was figure out what my point of view is. ‘Full Frontal’ is all about point of view; we don’t shy away from that at all,” said Bee. “All we can do is really kick the door in and see what happens, and I think that’s what we’ve accomplished.” And the network has been relatively hands-off: “I don’t know why they let us say the things we say.”

In addition to her roles as a producer, writer and star of “Full Frontal,” Bee also created, wrote, and produced “The Detour” with fellow “Daily Show” alum Jason Jones. Following a family of four on an ill-fated road trip, the series goes to dark and bizarre places – “I think when we start discussing the consistency of semen maybe we cross the line,” said Jones. But the show also came out of his love of family: “I was sick of seeing husbands and wives who didn’t like each other on TV. I wanted to reflect my relationship with my wife … So we get that couple in that relationship with their kids and then see how far we can bend them until they break.”

“Angie Tribeca” is something of a throwback, hearkening back to Leslie Nielsen‘s “Police Squad!” and “Naked Gun” police parodies. Rashida Jones, previously known for her roles in “The Office” and “Parks and Recreation,” explained, “As easy as it is to watch, it’s that hard to execute.” The series is jam-packed with quips and sight gags; for just one scene shown to press and Emmy voters, there were “animal trainers, there’s a ferret, there’s a dog, there’s all this choreography with the actors, lots of times there’s wardrobe changes in the middle of lines … It takes every single department to execute that. If everything’s not spot-on, it’s not funny.”

Do you think TBS’s ambitious comedy lineup will win Emmys? Make sure to join the TV discussion in our forums.