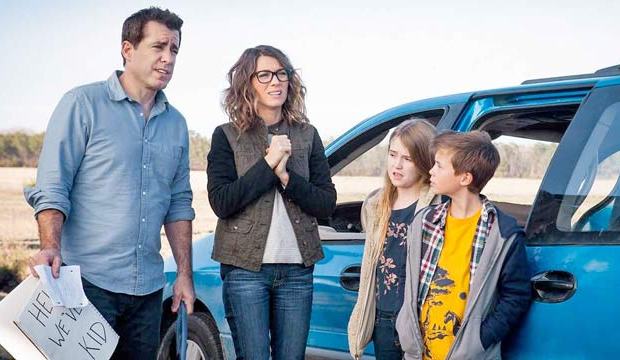 “The Detour” debuted last week on TBS to great reviews (scoring an 80% at Rotten Tomatoes) and ratings (earning an early renewal).  Unlike typical Emmy-winning comedies such as “Modern Family” and “Everybody Loves Raymond” that keep inventing reasons for the family to be at home, this show takes place entirely on a road trip to Ft. Lauderdale. Each episode of “The Detour” plays out like a scene from the classic movie “National Lampoon’s Family Vacation” (1983), with a new obstacle standing in the family’s way to paradise.

Jason Jones, who co-created the show with real-life wife Samantha Bee, stars as the fun-loving and wacky dad Nate. He begins the series by lying to his wife, telling her they’re going to the airport, only to get the road trip started once she falls asleep. Natalie Zea, best known for her dramatic work on “Justified” and “The Following,” gets to tap into her comedic skills as Robin the mom and “straight man” to Jones’ over-the-top father. However, the show does allow for Zea to be just as irresponsible as Jones, as when she eats pot gummies in the second episode allowing the children unrestricted access to the internet.

During the first few seasons of “Modern Family” and “Everybody Loves Raymond,” the children were shoved to the side with most of the stories taking place around the adults. Here, Ashley Gerasimovich (Delilah) and Liam Carroll (Jared) are the equal comedic counterparts to their adult co-stars, each a mini-me of their parents. Whether it’s successfully lying to a police office (Gerasimovich) or getting Columbus and Colombo confused (Carroll), these child actors masterfully skate that very thin line from being bored and funny.

Among those leading critics who endorsed the pilot, which could well contend for Best Comedy Writing, was Darren Franich (Entertainment Weekly) who wrote, “The fun and challenge of ‘The Detour’ is how it seems to be going for comedy in every direction, from delicate character comedy to sight gags to gross-out humor to full-fledged farce. Like, for real, ‘The Detour’ might be a ‘True Detective’ parody.”

And Ken Tucker (Yahoo TV) says of its stars, “I did find Jones and Zea pleasant company — yes, they’re playing parents who speak and do inappropriate things around their children, which is a common sitcom trope these days, but the actors nevertheless make them likable, flawed parents.”