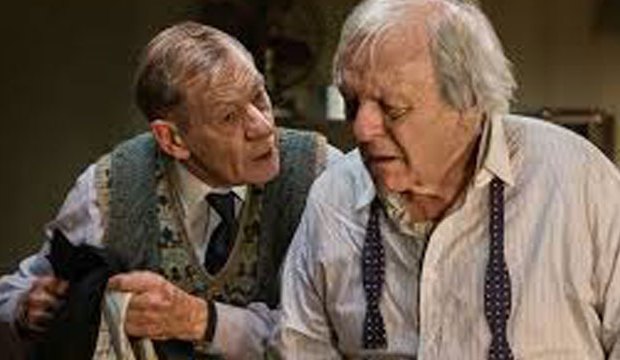 Ronald Harwood‘s play “The Dresser” reaped Tony nominations in 1982 and the film version the following year contended at the Oscars. On May 30, Starz will air an acclaimed TV adaptation starring Anthony Hopkins and Ian McKellen as an actor facing the end of his career and his encouraging loyal assistant respectively. Buoyed by the rave reviews from some of the leading television critics excerpted below, expect both of these knights of the realm to reap Emmy Awards nominations.

Each already has a mantle crowded with awards. Hopkins won an Oscar in 1991 for his chilling performance in “Silence of the Lambs” and has contended three more times since. He won his first two Emmy bids for leading performances in the telefilms “The Lindbergh Kidnapping Case” (1976), in which he played the accused Bruno Hauptmann, and as Adolf Hitler in “The Bunker” (1981). McKellen, who has contended twice at the Oscars and five times at the Emmys, has yet to win either of those prizes. However, he claimed a Tony in 1981 for “Amadeus” and has a staggering five Olivier Awards (the British equivalent of the Tonys).

Nancy Dewolf Smith (Wall Street Journal): “Watching Messrs. Hopkins and McKellen in the full expression of their powers in a TV setting but stagelike enough to be a stellar showcase is a treat as good as the play itself.”

Matthew Gilbert (Boston Globe): “Hopkins delivers all the rage, agitation, and self-pity of a fallen giant. As Sir blusters and blows hard inside his dressing room, air raids pop in the distance. It’s Shakespeare’s ‘Blow, wind, and crack your cheeks’ in an echo chamber. But it’s McKellen’s Norman who is at the emotional center of the film. And McKellen is majestic in the role of the man behind the man.”

Maureen Ryan (Variety): “As the film progresses, McKellen and Hopkins find the terrified, small human beings behind the various masks their characters wear, and Sarah Lancashire and Emily Watson are pitch perfect as Madge, a stage manager, and Sir’s actress wife, Her Ladyship, respectively.”

Do you think both Hopkins and McKellen will be nominated at the Emmys? Make your Emmy predictions right here. You’ll compete to win our contest prizes for best picks — $500 (first place), $300 (second place) and $200 (third place) in Amazon gift certificates — a place of honor on our leaderboard and a starring role in next year’s Top 24 Users (the two dozen folks who do the best predicting this year’s Emmy nominations). Be sure to read our contest rules.