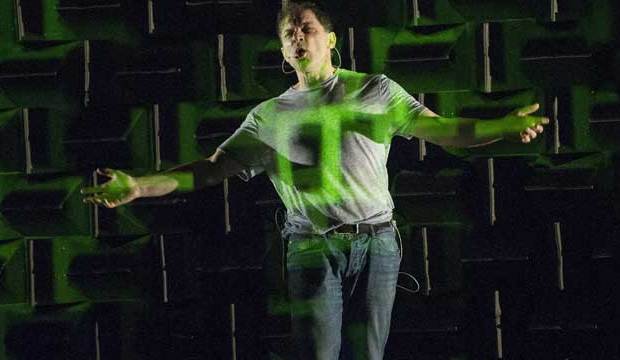 “The Encounter,” the first play to open in the 2016-2017 Broadway season, also holds the distinction of being its most unique entry. Using advanced sound design, “The Encounter” chronicles real-life photojournalist Loren McIntyre’s adventure in the Amazonian rainforest as he attempts to locate the indigenous Mayouruna tribe. In order to intimately convey McIntyre’s adventure,  each audience member is given a headset to create a 360° sonic experience. Simon McBurney, founder of London’s Complicite theater group, not only plays McIntyre in the production, but also controls the audio throughout the show by mixing his live performance with a multitude of other sound effects.

How warmly did theater critics embrace this high-concept production?

By and large, reviews were positive, praising the envelope-pushing manner in which “The Encounter” tells its story. Crowning it a Critics’ Pick, Ben Brantley (The New York Times) calls the show “astonishing,” marveling at how the production “transforms a sterile stage into a phosphorescent jungle,” and praising McBurney’s “passionate and physical” performance. Similarly, Matt Trueman (Variety) hails the play as a “deeply immersive experience, completely transporting. You seem to fall out of time… rapt at this gripping thriller,”

Some critics expressed reservations, though. Jesse Green (Vulture), while acknowledging the show’s innovative approach to stagecraft, argues, “It’s immersive, yes, but not so much theater: It’s more like watching a radio show in a studio.” And Johnny Oleksinksi (New York Post) takes Green’s critique one step further, declaring the show “a public podcast, complete with high-quality headphones for every theatergoer and enough yawns for a anesthesia symposium.”

What do these reviews mean for the show at the Tonys Awards?

“The Encounter” could very well end up reaping a nomination for Best Play as only six new works are currently slated to open this season. McBurney may have a hard time cracking the Lead Actor in a Play category: Not only is he up against past Tony champs Nathan Lane, Kevin Kline, Jefferson Mayes and Joe Mantello but “The Encounter” closes in January, three months before nominations are decided. And it will be hard-pressed to reap bids in below-the-line categories, because of its minimalist staging. This likely rules out nominations for Best Scenic Design, Best Lighting Design, and most certainly Best Costume Design.  Unfortunately, the one category that “The Encounter” could have well won, Best Sound Design of a Play, was discontinued last year.