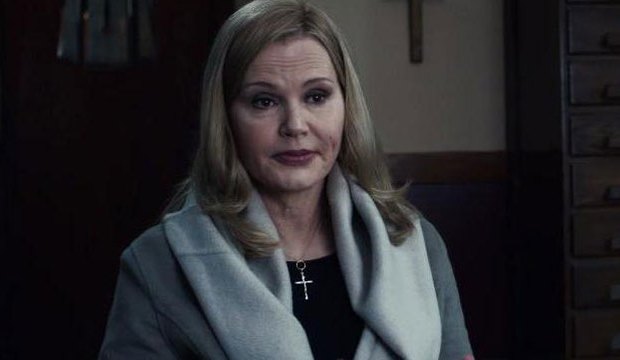 Geena Davis returns to series television on Fox’s “The Exorcist.” This marks her first regular role since playing the eponymous character in ABC’s “Commander in Chief” from 2005 to 2006. Despite that drama’s troubled production — three show runners over 18 episodes — and swift cancellation, Davis was roundly acclaimed for her commanding performance, winning the Golden Globe for Best Drama Actress and earning nominations from the Emmys and Screen Actors Guild Awards. It was no breakout role for Davis though, as she was already an Academy Award winner for “The Accidental Tourist” (Best Supporting Actress, 1988) and nominee for “Thelma & Louise” (Best Actress, 1991).

“The Exorcist” is an adaptation of the 1971 novel of the same name by William Peter Blatty, who wrote the script for the 1973 film version that was a cultural sensation, tallying over $400 million at the worldwide box office ($1.8 billion adjusted for inflation) and earning 10 Oscar nominations. It was the first horror film to be nominated for Best Picture and it won two races, including Adapted Screenplay for Blatty. Ellen Burstyn received her first nomination in the leading category — she would win the next year for “Alice Doesn’t Live Here Anymore” — for her role as Chris MacNeil, whose daughter requires an exorcism. Davis occupies the equivalent role in the Fox series, under the name Angela Rance.

Advance reviews for the series were “generally favorable,” meriting 61 on Metacritic, with Rotten Tomatoes summing up the critical consensus thus: “‘The Exorcist’ doesn’t come close to its classic source material, but still boasts a tense narrative that manages some legitimate scares and credible special effects.” Praise for Davis has been positive, albeit muted. TVLine’s Charlie Mason cited her as a key part of the “top-notch” cast while Variety’s Maureen Ryan praised her as part of the show’s “very strong foundations.”

Three million Americans tuned into the Fox premiere last Friday, yielding a preliminary 1.0 rating in the 18–49 demographic. New shows tend to erode viewers quickly, but if it can maintain those numbers, “The Exorcist” will be a lock for renewal, especially since it surprisingly drew a younger average audience than any other program Friday evening on the big four commercial broadcast networks.

So, how will “The Exorcist” fare with awards groups? Performances in the horror genre do better at the Golden Globe and Critics’ Choice Awards than the Emmys. One-time Oscar nominee Vera Farmiga (“Up in the Air”) has been nominated by Critics’ Choice voters three times for her work in “Bates Motel” (2013-2015). Oscar champ Anna Paquin (“The Piano”) won the Globe on her first of two nominations for “True Blood” (2008, 2009) and Eva Green (“Penny Dreadful”) picked up nominations from both groups last year.

The Globes are also especially kind to new shows. Four of their last five Best Drama Actress winners have been from first-year shows; the Emmys have only awarded two in the same time and did not even nominate an actress from a new drama last year. It has been a decade since the Globes did not nominate a first-year drama actress.

However, Davis faces stiff competition at the Emmys, as all six of last year’s Drama Actress nominees are eligible again. That lineup also includes three actresses with past nominations for film work, including Oscar nominees Viola Davis (“How to Get Away with Murder”) and Taraji P. Henson (“Empire”) and Globe nominee Robin Wright (“House of Cards”). If Geena Davis submits as a lead instead of a supporting actress — the series places greater emphasis on the eponymous exorcists themselves — and is nominated, she would be the first Oscar winner nominated in the category since Kathy Bates for NBC’s “Harry’s Law” in 2011 and 2012.

Vera Farmiga ('When They See Us'): Will she cash in her Emmy IOU after 'Bates Motel'…