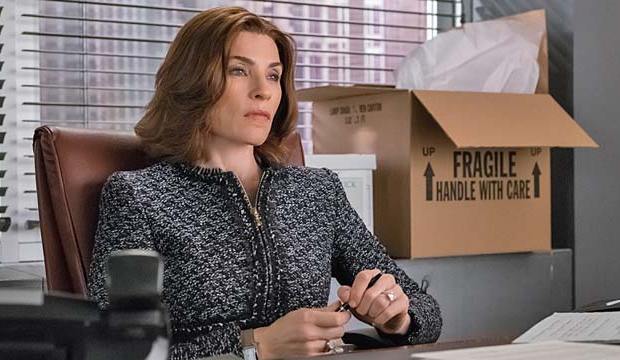 Margulies was joined by long-time cast member Matt Czuchry, new star Cush Jumbo and showrunners Robert and Michelle King for the panel that included many reflections on the show’s legacy. “When actors commit to doing a television series, their fear is to get lazy, complacent, feel bored by playing the same character for that long,” Margulies noted. “And every day I was challenged as an actor to play her. So I never for a second got bored. I always looked forward to peeling these layers off of her and finding out who she was becoming. That was my ultimate gift from the Kings. They just wrote a very complex character that I found challenging to play.”

‘The Good Wife’ final season: Will Emmy Awards give it a goodbye hug?

As for one of his favorite storylines over the seven years, Czuchry mentioned the heralded prison arc for his character Cary Agos at the beginning of Season 6. “The first episode of that, ‘The Line,’ where he gets arrested and his hand cut, and then an episode called ‘The Trial’ that kind of threw out that whole arc. [Those are] some of my favorite kinds of moments.”

Jumbo admitted that she was a such a massive “Good Wife” fan back home in the UK that her new co-stars were “laughing at me.” “I just thought it was one of the best shows that certainly we were getting from the US and I got completely addicted to it, never knowing that I would end up in the show. Just the thing of moving here to New York permanently and walking onto set the first day was mind-blowing for me.”

Michelle added that her favorite character evolutions over the years came from Cary and Diane (Christine Baranski). “When we conceived the show, they felt like antagonists to Alicia. But then Matt was so spectacular and Christine was so wonderful that basically we fell in love with our antagonists and suddenly they become protagonists and we had to invent bad guys.”

Robert clarified why they decided to conclude the show this year, revealing, “It felt like a show you had to end. It didn’t feel like a show that you could keep having crazy things happen to you. At a certain point you escape the realm of probability. Michelle and I had always from the beginning committed to doing a certain amount ourselves and it helps you write to know [where you are] in the story.”