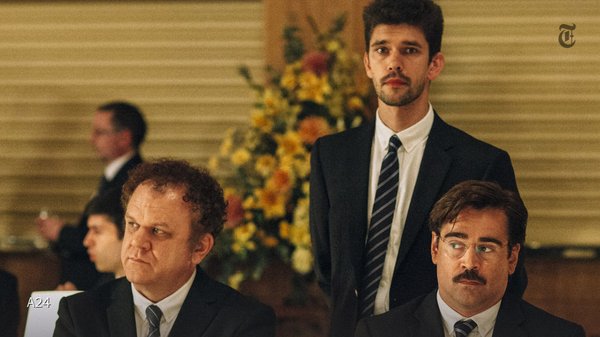 A24, the indie film distribution company that scored three major Oscar wins in February — Brie Larson as Best Actress for “Room,” Best Visual Effects for “Ex Machina” and Best Documentary Feature for “Amy”– rolled out “The Lobster” this weekend to stellar reviews (95% at Rotten Tomatoes) and the year’s best specialty opening so far (an estimated $188k in just four LA/NY theaters). But can the up and coming distributor take this strong debut weekend and translate it into Golden Globes and Oscar gold for the quirky romance comedy film? I take a look at its awards journey here—be sure to share your opinion on how the film fits into the race in the comments below!

“The Lobster” began its long, slow campaign a full year ago when it premiered at the 2015 Cannes Film Festival, ultimately taking home three honors there including the Jury Prize, widely considered to be the third most prestigious prize of the festival (after the Palme d’Or and the Grand Prix). Following that it grabbed seven British Independent Film Awards nominations with scene stealer Olivia Colman taking Best Supporting Actress and five European Film Awards nominations with two wins (Best European Screenwriter and Best Costume Designer). The film opened in almost every international market last year. However, without a U.S. release date the film could not compete for any major American awards though it did show up on a few year-end lists with critics groups.

The film will be eligible this fall for the more prestigious New York Film Critics Circle and Los Angeles Film Critics awards and so now, a year later, “The Lobster” begins the final lap of its stateside awards campaign. A24 has proven to be as capable a distributor as any at taking a film from early in the year all the way to the Oscar stage. They did that with “Ex Machina,” which was the surprise of  2015 with its two Academy Awards nominations and one win after opening to similar specialty numbers in early April and overcoming the usual awards bias against sci-fi/fantasy pics.

One of “The Lobster’s” strongest assets is its ensemble cast. Aside from that BIFA win for Colman, whose American awards profile is surely raised given her current role on the miniseries “The Night Manager,” the film also boasts very strong comedy performances from lead Colin Farrell and supporting players Ben Whishaw, Rachel Weisz, John C. Reilly and Lea Seydoux. The obvious angle will be a run at the Golden Globes comedy races as well as a possible SAG nomination for Best Ensemble.

After the early season awards, A24’s sights will be set on the Academy Awards where they could very well bring the film’s director, Yorgos Lanthimos, back for his second time; his debut feature, “Dogtooth,” was nominated in 2009 as Best Foreign Language Film representing Greece. “The Lobster” is his English language debut and could factor into a Best Actor bid for Farrell (a Golden Globes win would be a huge boost) as well as nominations for some of the supporting cast and Best Original Screenplay.

Martin Phipps ('The Crown' composer): The musical cues for Diana evoke 'the unstoppable tragedy that…

What do these 3 potential Oscar winners have in common? 'Doctor Who'

SAG Awards nominee profile: Olivia Colman ('The Father') is a TV winner who could finally triumph in…