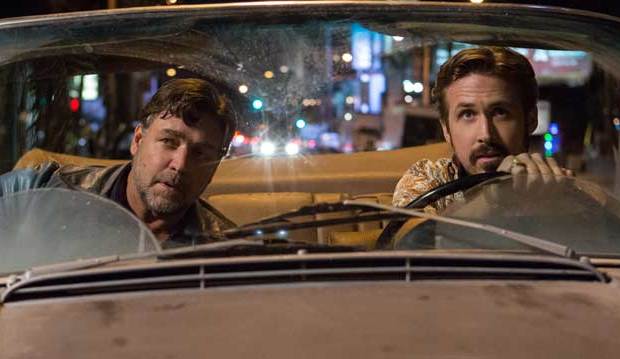 Oscar-winner Russell Crowe and Oscar-nominee Ryan Gosling are best known for serious dramas, but they’ve teamed up this year for “The Nice Guys,” a buddy comedy set in 1970s Los Angeles about a private eye (Gosling) and an enforcer (Crowe) working together to find a missing girl. It opened May 20 to strong reviews (71 on MetaCritic, 89% fresh on Rotten Tomatoes). Will it be an awards contender?

While action comedies aren’t typically appreciated by Oscar voters, the Golden Globes are much more open to lighthearted action fare. Consider Joaquin Phoenix‘s nomination for Best Musical/Comedy Actor in 2014 for another outlandish 1970s mystery, “Inherent Vice.” Before that Robert Downey Jr. won that category for the action-packed re-imagining of “Sherlock Holmes” (2009), and the crime comedy “In Bruges” won the same award for Colin Farrell in 2008 and was also nominated for Best Musical/Comedy Picture. So “The Nice Guys” should be right up their alley.

Crowe previously won a Golden Globe for Best Drama Actor in “A Beautiful Mind” (2001) and has five total nominations. However, all of those were for dramas; the Hollywood Foreign Press has yet to award him as a funnyman.

Will “The Nice Guys” finish first? Make sure to join the film discussion in our forums.