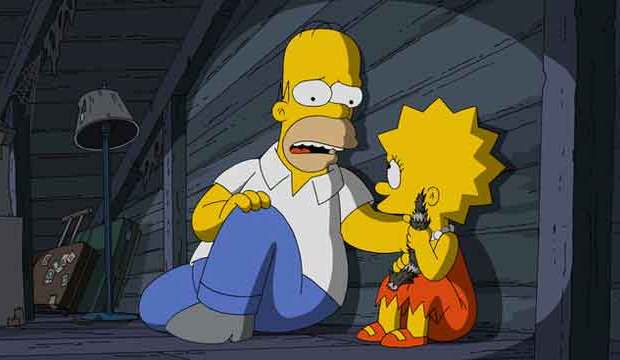 When it comes to animated programming at the Emmys, “The Simpsons” stands above all else. Over the show’s 27 seasons (with more on the way), this titan of TV has amassed 28 wins from 83 Emmy nominations. While 10 of those trophies were for Best Animated Program (out of 25 nominations), “The Simpsons” hasn’t won this category in eight years (“Eternal Moonshine of the Simpson Mind” prevailed in 2008). That is the longest losing streak in its history. This year, it competes against two past champs, along with a returning nominee and a first-time competitor.

“The Simpsons” producers have chosen the episode “Halloween of Horror” as their submission this year. Homer gets three lazy clerks fired from a pop-up Halloween store before taking Lisa and Bart to the Krustyland Halloween Horror Night. When Lisa gets overly frightened by the experience, Homer and Marge squash all Halloween celebration to help her cope. Marge takes Bart and Maggie trick-or-treating while Homer watches over Lisa. The three fired workers invade the Simpson house to get revenge on Homer.
This was one of the best-reviewed episodes of the past several years. After trying to win with their annual Halloween special three previous times (1996, 2013 and 2015) this could the one to do it.

“Bobs Burgers” won this race two years and is back for a fifth consecutive time. Producers have entered “The Horse Rider-er” for consideration. Tina is surprised with a trip to a local horse camp which excites her and causes her to “break-up” with her imaginary horse, Jericho (voiced by Paul Rudd). However, when she arrives, the time spent on her assigned horse, “Plops,” is not quite as magical as she expected. The character of Tina has certainly taken off in popularity and helped this FOX show claim a victory in 2014.

“South Park” has won this category five times (2005, 2007, 2008, 2009, 2012). In support of its 15th nomination, producers submitted “You’re Not Yelping.” Being a Yelp reviewer is taking South Park by storm. Cartman uses his new-found status to both get free food and demean the people working at local restaurants. When they start to rebel against the on-line critics, Cartman calls a meeting of Yelp reviewers to designate a single leader. Everyone believes they’re supposed to be that leader and the town erupts into its usual brand of comedic chaos. In a highly regarded 19th season, this episode was one of the more divisive in terms of the reaction.

“Archer” is now a regular in this race, having scored its third consecutive nomination, and has chosen the season seven premiere, “The Figgis Agency.” The gang from ISIS is back in the form of a private detective agency and has relocated to Hollywood. Their first client is a famous actress looking to recover some sensitive information from the home of her former lawyer. Despite it being on its seventh season and third reboot, the show is as smart and funny as it’s ever been. This episode was well-received and that could definitely help “Archer” finally make it to the Emmy stage.

Rounding out the category is “Phineas and Ferb” with their series finale “Last Day of Summer.” Phineas and Ferb’s sister Candace is determined to bust her brothers before summer is over. When her plan is thwarted, she uses a machine from Dr. Doofenshmirtz to start the day over. This ends up causing a rift in the space time continuum and Candace must now team up with her brothers to prevent time from completely collapsing.  This is the one nominee specifically aimed at children. Such series have been able to pull off wins in the past including “The Penguins of Madagascar” in 2013 and “Over the Garden Wall” last year. In addition to being the “orange in a basket of apples,” there could be a sentimental factor at play. This program was beloved and voters in the animation branch could want to give it a goodbye hug. While it has yet to win a competitive Primetime Emmy, it took home three juried prizes and a Daytime Emmy win in 2010 for Best Writing in Animation.