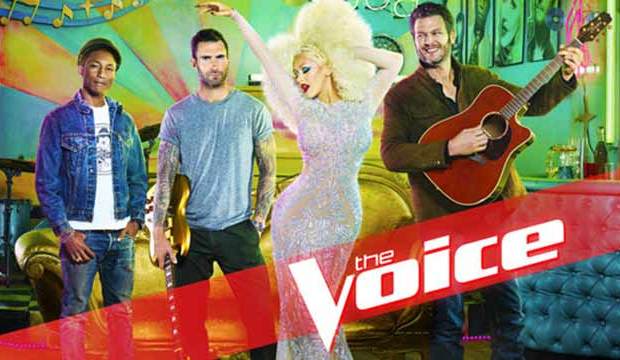 We hear it all the time from the mentors, advisors, and judges on “The Voice” — song choice is one of the most critical decisions an artist and/or coach will make. There have been many great picks this season, but unfortunately there have been some bad ones, too. In the spirit of looking ahead to the Top 8 performances on next Monday’s live episode, I’m offering up my suggestion of the perfect song choices for each of the remaining artists. Remember that a whopping four artists will be eliminated next Tuesday, so this is probably the most important week of the 10th season.

Do you agree or disagree with these choices? Which songs would you suggest for coaches Adam Levine, Blake Shelton, Christina Aguilera, and Pharrell Williams to select? Let us know in the comments below.

Adam Wakefield (Team Blake) – “Lights Came On”
As much as I want him to, there’s no way Wakefield is ever going to choose something too far outside the country rock box he’s comfortable in. The farthest he’s ventured was his Top 10 performance of “I’ve Got a Woman,” but even that lends itself to the southern rock style of some of this other choices. Instead of genre-flipping, I think Wakefield should set his sights on something currently on the country charts from Jason Aldean that would help place him within today’s country rock market.

Alisan Porter (Team Christina) – “The Voice Within”
Porter has been consistently great at her song choices so my suggestion for her is to stay on the path she’s already created for herself — big vocals with a rock-leaning edge. This week I think she went too far in the rock direction and her vulnerability with the public vote and iTunes sales was shown. I think there’s a missed opportunity in the fact that she hasn’t attempted one of her coach’s own songs yet. Christina Aguilera is one of the greatest vocalists of her generation so one of her inspirational ballads could be a really good fit for the semifinals.

Bryan Bautista (Team Christina) – “Georgia on My Mind”
Bautista had the performance of the season when in the battle round on “It’s a Man’s Man’s Man’s World.” Although he was very good this week with “1+1” he still has yet to recreate the magic of that battle. Perhaps this is because most of his recent selections are contemporary. With that in mind, my suggestion is that he go back to something time-tested and well known, such as one of Ray Charles’ most beloved hits.

Hannah Huston (Team Pharrell) – “You Were Meant for Me”
Huston had a big moment in the Top 9 with “Say You Love Me,” so I think she’d benefit from scaling it back again and doing something that lets the softer sides of her voice do all the work. I think she could also benefit from pulling a track from a more universally known artist and if she’s going to stay in her wheelhouse of singer-songwriters then there’s no choice better than Jewel.

Laith Al-Saadi (Team Adam) – “Something About the Way You Look Tonight”
Technically speaking, Al-Saadi has already performed Elton John once this season. It was on the results show of the first round of the live playoffs when Team Adam joined for “Your Song.” Being instantly recognizable, this style of music lends itself really well to singing competitions, so it’s never too big of a risk for someone to choose his songs. But for Al-Saadi, I don’t think risk should be the goal. Instead he needs to get back behind the keyboard and give his voice another chance to soar on a really big song.

Mary Sarah (Team Blake) – “Mean”
Of her performances I see mentioned most often in the comment sections here and on Twitter, the blind audition of “Where the Boys Are” was her best. I think what people are drawn to is her ability to bridge the sensibilities of classic and current country music together. But she’s shown us many times that she can do that, so I think she should try building a different kind of bridge now — one that remains true to her country roots, but shows she has genre crossover appeal. In that sense, the logical choice is Taylor Swift.

Paxton Ingram (Team Blake) – “Not Gon’ Cry”
Personally I like what Ingram has accomplished when he takes a big dance track and strips it down, but the truth is that he had his best week in the Top 11 with the gospel song “Break Every Chain.” Following the lead of that choice, I think what Ingram needs is another big, show-stopping vocal. Because her music is heavily influenced by the gospel, R&B and dance elements that Ingram has shown a passion for, I think a Mary J. Blige ballad is the logical direction for him to go next.

Shalyah Fearing (Team Adam) – “Alone”
For the first time in the live playoffs, Fearing seemed at risk of elimination this week. Hopefully being last to be called safe will inspire her to return to take a big risk next. Her biggest moment was Beyonce’s “Listen,” but I don’t think returning there is risky enough to give her another breakout performance. Instead I think she find the needed shock value by going with something in the pop rock genre that still allows her a large chorus to really belt. I think Heart’s most popular song could vault Fearing to the top of the iTunes charts.