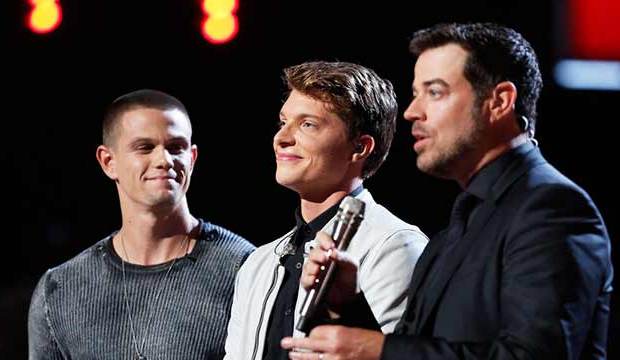 Daniel Passino could not escape elimination from “The Voice” two weeks in a row. After battling for a last minute “instant save” last Tuesday, it was Passino in the bottom of the rankings for the Top 10 show this week. The Emmy-winning NBC reality show placed him up against Nick Hagelin for an end-of-show battle to see which one would be voted out.

Both artists were actually kicked out by their own coaches much earlier in this 10th season but were revived with a new “comeback” opportunity. Other “comeback” performers were gone almost immediately, but these two men have been hanging on for a while.

For the last segment of Tuesday’s program, each artist performed for a social media save from the home audience. Hagelin, a member of Team Christina Aguilera, sang “Thinking Out Loud” by Ed Sheeran. Passino, a member of Team Pharrell Williams, performed “Uptown Funk” by Mark Ronson and Bruno Mars.

Moving forward into the Top 9 show for Monday, May 9, here is how each team stands:

Williams is down to Hannah Huston as his last competitor.

Aguilera has all three of her singers left with Bryan Bautista, Hagelin, and Alisan Porter.

Visit the Gold Derby home page on Wednesday as we have an interview with eliminated artist Passino and our power rankings for the upcoming Top 9 episode.