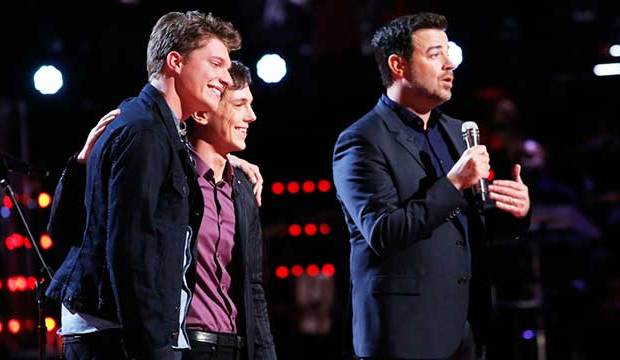 Owen Danoff was once again at the bottom of the rankings for “The Voice” this week. He survived last week when pitted against Emily Keener, but could he make it again on Tuesday’s results show? As it turned out, both Danoff and Daniel Passino would have to fight it out to see who could make it beyond the Top 11 and into next week’s Top 10.

These two artists were the ones with the worst iTunes sales this week, so it was pretty obvious it might be them in an end-of-episode battle to avoid getting kicked off. Danoff was a member of the team for coach Adam Levine. Passino represented his coach Pharrell Williams, who already had Keener eliminated before and couldn’t afford another costly loss.

The two young men performed for a chance at an “instant save” from the home audience. Passino sang “Jealous” by Nick Jonas and defeated Danoff as he took on “Burning House” by Cam.

‘The Voice’ Top 11:
Laith Al-Saadi was best on Monday but who was worst?

Moving forward into the Top 10 show for Monday, May 2, here is how each team stands:

Levine has only two contenders remaining in Laith Al-Saadi and Shalyah Fearing.

Williams also is down to the two competitors of Hannah Huston and Passino.

Visit the Gold Derby home page on Wednesday as we have an interview with eliminated artist Danoff and our power rankings for the upcoming Top 10 episode.