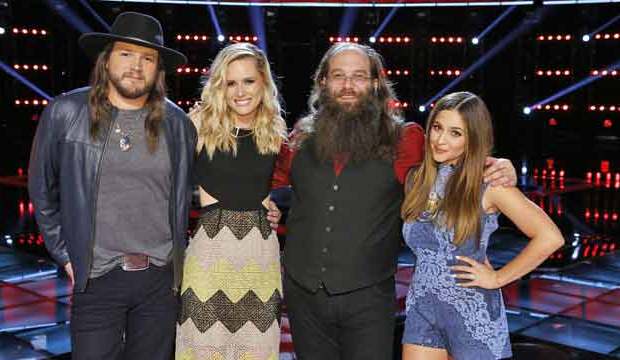 The Top 4 artists performed on Monday’s episode of “The Voice,” but who was best? Was it a frontrunner like Adam Wakefield or Alisan Porter? Or can Laith Al-Saadi or Hannah Huston make a strong come-from-behind effort to win the 10th season championship?

Our writer Denton Davidson has written his articles about each contestant. Click each name for pro and con reports on Wakefield for coach Blake Shelton, Al-Saadi for coach Adam Levine, Huston for coach Pharrell Williams, and Porter for coach Christina Aguilera. Take our poll at the bottom of this article and tell us which of these four artists you predict as champion.

Following the format of last year’s live performance finale, these four contenders performed in three rounds of competition Monday night — two solos (a cover and an original written by them) and a duet with their coach. Fortunately for the producers and NBC, each of the four judges has an artist in the finale this season. Though it was nice to honor the culmination of each coach/artist season-long relationship with their duets, it’s their two solo performances that are most likely to be the determining factors in which artist viewers vote the champion. With that in mind I rank the eight solo performances of finale night and contextualize them within each artist’s journey to the finale. Agree or disagree? Let me know in the comments!

1. Alisan Porter (Team Christina) – “Somewhere”
There’s a reason producers gave Porter the opportunity to close out the competition. Her control, confidence and consistency has distinguished her as the frontrunner for most of the season, and all are on pitch perfect display in this performance. The big note that she ends on is the type of moment that reality singing competitions were created for.

2. Hannah Huston (Team Pharrell) – “Every Breath You Take”
I don’t know how she did it, but Huston made a classic Police song sound like a James Bond theme! And that’s kind of the magic of Huston as an artist doing covers – -she has the ability to take a well-known song and completely change it into something her very own. This feels like the perfect cherry on top of Huston’s unique season.

3. Adam Wakefield (Team Blake) – “Lonesome, Broken and Blue”
Wakefield is the real deal, and Shelton is right when he says that this song grabs you from the very first verse. I think Wakefield was smart to remind the audience that he is still very much traditional country at his core because he’s been focusing on the rock elements in recent weeks.

4. Alisan Porter (Team Christina) – “Down That Road”
What works so well with Porter’s original song is the theme of inspiring people to overcome the obstacles in their lives — this is a message Porter has represented in the competition and is one her audience connects with. This is a great example of the type of artist she’ll be after the competition. It doesn’t sound like a cheesy coronation song, it sounds like people have been singing it and will continue to sing it for decades.

5. Adam Wakefield (Team Blake) – “When I Call Your Name”
In terms of making the competition work in his favor, Wakefield might be the smartest artist of the four left. It’s a brilliant move to sit behind the piano for his second solo after standing with the guitar in his first. The versatility of Wakefield within his genre — ranging from bluegrass to classic rock to Nashville standard — is impressive and is likely the determining factor if he’s named the champion.

6. Laith Al-Saadi (Team Adam) – “Morning Light”
Al-Saadi’s voice sounded much better on this track of his than it did on his cover earlier in the night. The guitar solos are what differentiate him from his competitors and will be his best asset in making a career for himself after the show. But in terms of aiding him in becoming “The Voice” winner, it’s a bit of a stretch.

7. Hannah Huston (Team Pharrell) – “I Call the Shots”
Huston has a fantastic voice, but there’s an element of uncomfortableness in the way she moves about the stage and it’s never been more evident than in this moment. The song is great, but it’s like that great song on an album that is never an actual single because it lacks the crossover appeal. It sucks to see her go out on this note because the cover early in the show was one of the best of the night.

8. Laith Al-Saadi (Team Adam) – “White Room”
As classic of a rock song as this is, in terms of the competition I think Al-Saadi did himself a disservice by not doing something more pop-leaning. Sure he has his own fan following already, but because of the lack of cross-genre appeal this performance isn’t going to win over the “independents” still looking for a favorite to vote for in this final round.