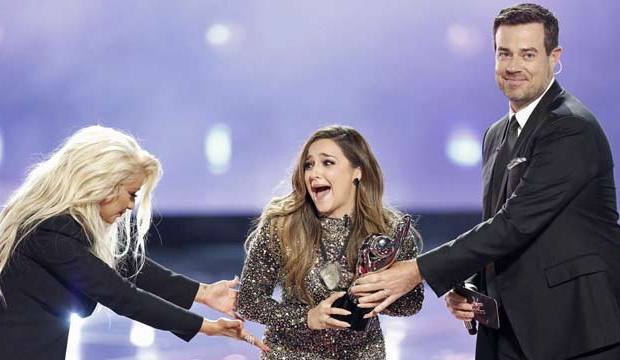 Alisan Porter won the 10th season championship of “The Voice” on Tuesday over Adam Wakefield. Porter’s coach Christina Aguilera is now the first female mentor to win with the top artist after several efforts by herself, Shakira, and Gwen Stefani. Wakefield was coached this season by four-time champ Blake Shelton.

Our recent poll with over 20,000 people voting showed it was going to be a very tight race between Porter and Wakefield. The other two contenders — Hannah Huston coached by Pharrell Williams and Laith Al-Saadi coached by Adam Levine — finished in the third and fourth positions, respectively. Click each of those artist names in this paragraph for our recent pro and con reports on how we projected they would finish.

Porter is a former child star from the films “Curly Sue” and “Parenthood.” Here is a look back at her song choices this season: “Blue Bayou” by Linda Ronstadt (blind audition), “California Dreamin'” by The Mamas and the Papas (battle round), “River” by Joni Mitchell (knockout round), “Cry Baby” by Janis Joplin (live round one), “Stone Cold” by Demi Lovato (top 12), “Stay With Me Baby” by Lorraine Ellison (top 11), “Let Him Fly” by Patty Griffin (top 10), “Cryin'” by Aerosmith (top 9), “Desperado” by The Eagles (top 8), original song “Down That Road” (top 4), and “Somewhere” by Leonard Bernstein and Stephen Sondheim (top 4).