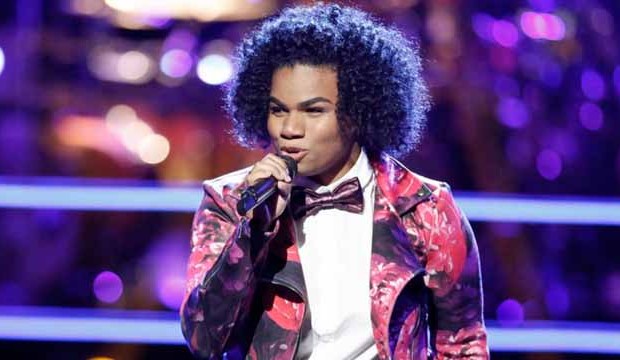 We finally have a frontrunner on “The Voice” for the current 11th season, and her name is We` McDonald! Monday’s episode featured the first knockouts of this autumn cycle, and if I’m right about McDonald, it means rookie coach Alicia Keys is going to triumph her first time in the arena. She is facing off against fellow rookie coach Miley Cyrus, four-time top coach Blake Shelton, and three-time winner Adam Levine. Will McDonald prevail this season and join the 10 past winners featured in this photo gallery?

Let’s take a look at Monday’s six knockout pairings, who prevailed to reach the upcoming live rounds, which ones were eliminated, and my rankings from top to bottom. Click each coach’s name in this paragraph to see Denton Davidson‘s current rankings for Team Adam, Team Alicia, Team Blake, and Team Miley.

1. Wé McDonald (“No More Drama”) vs. Courtnie Ramirez (“If I Were a Boy”) – Team Alicia
Uunlike the last couple of seasons (with Alisan Porter and Jordan Smith), the current one had yet to put forward a clear leader over the first few weeks. Given the two performances prior to this, it’s hard to not have thought of Wé as one of the frontrunners, but lots of artists have been showcased well. Monday marked her third flawless, magnificent performance, so Wé has now established herself as the one to beat. Though Courtnie put up a good fight and she provided the big moment she needed to in a big song, Wé was simply unbeatable this early in the season doing one of Mary J. Blige‘s most soulful tracks.

2. Ali Caldwell (“No Ordinary Love”) vs. Lauren Diaz (“Rise Up”) – Team Miley
Miley had these two artists face off because of their similarly big voices. With completely different song choices, both lived up to that expectation. Lauren’s performance is loud, large and hits you over the head with its power while Ali’s is smooth, sensual and provides her the opportunity to expand upon it and make it bigger. In that regard Ali proves herself the more valuable competitor going forward, and Miley takes her along to the next round. Lauren is good, but too safe so I understand her not being stolen by another coach.

3. Kylie Rothfield (“Hound Dog”) vs. Whitney & Shannon (“I Won’t Give Up”) – Team Alicia
For me Kylie is a standout performer among all the artists in the competition, and she hit a home run this round with an electric and gritty performance of a song that everyone knows. Having to follow her, the sisters were at a severe disadvantage because they’re gentler performers who leave less of an impression when all is said and done. Alicia keeps Kylie and rightfully so because I’m not sure we’ve seen the best Kylie has to offer yet.

4. Sundance Head (“The Climb”) vs. Josh Gallagher (“My Maria”) – Team Blake
It was risky of Blake to pit Sundance against Josh because I think they’ve both proven to have the goods to take it all the way. Both being conventional country performers, though, means that Blake should only make room for one of them on his team. Thankfully Adam swoops in with the steal to make sure Josh continues on after Blake picks Sundance. Sundance is the rightful winner of the head-to-head for having picked a more out of the box song and for delivering a more dynamic vocal thanks to the acoustic arrangement.

5. Simone Gundy (“Midnight Train to Georgia”) vs. Dave Moisan (“Like I Can”) – Team Adam
Considering Simone got the short end of the stick last round with her performance being edited down to a brief snippet, it’s surprising to see her win here over an artist that received a four-chair turn in the blinds and a coach’s steal in the battles. But Dave hasn’t recreated the magic he made way back in his first performance, and against Simone he is washed entirely away. Simone is no longer at the disadvantage of less screen time because she made a big name for herself tonight and audiences will remember this performance when it comes to voting for her in the live rounds.

6. Riley Elmore (“Haven’t Met You Yet”) vs. Jason Warrior (“I Want You”) – Team Adam
Typically the final performance of an episode is the best of the night, but in this case I was pretty underwhelmed by both artists. My opinion of Riley and his chances in the competition differs greatly from Adam who chose him to win for an awkward Michael Bublé recreation over Jason’s comfortable and confident style. Because I disagree with Adam’s choice at a winner I am thrilled that Blake stole Jason back. But I can’t help but feel like there are artists who lost their knockout tonight that deserved a steal more.