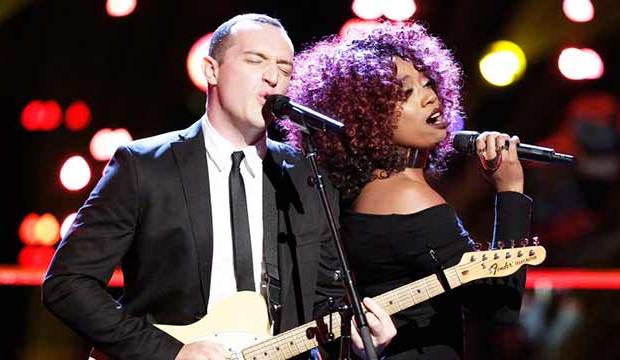 It took several battle rounds for this 11th season of “The Voice,” but rookie coach Miley Cyrus finally provided the audience with the week’s most intense face-off. It featured her artists Aaron Gibson vs. Sa’Rayah in Monday’s best moment. Cyrus is facing off this year against fellow rookie coach Alicia Keys, four-time top coach Blake Shelton, and three-time winner Adam Levine. Will one of these artists be able to triumph this season and join the 10 past winners featured in this photo gallery?

1. Aaron Gibson vs. Sa’Rayah (Team Miley): “I’ll Take Care of You”
Of all the battles this one felt most like two established artists meeting on the Grammy stage to cover a song together. They’re such different artists but both made their gifts work with the others, and the results were spectacular. I think Sa’Rayah has a longer life to live in the competition so thankfully both are moving on with Alicia stealing her after Miley shockingly chose Aaron. I would love to see Aaron defy my expectations and make a run deep into the show, but my money is on Sa’Rayah.

2. Josh Halverson vs. Kylie Rothfield (Team Alicia): “House of the Rising Sun”
Josh and Kylie were given the best song of the night and they blew a majority of the duets out of the water. Kylie was so unbelievably strong on the song that there was no possible way Alicia wouldn’t choose her. I think Josh has what it takes to make it as an artist, but his value to the show is hard to assess because he has one of those unique love it or hate it styles. Both are incredibly engaging as artists so it’s exciting to see Miley steal Josh. That relationship is going to produce something great.

3. Blaine Long vs. Josh Gallagher (Team Blake): “Stranger in My House”
For me this battle was no contest and honestly it probably wasn’t meant to be one. Josh is such a strong contender for a deep run in the competition from his blind audition alone that I can’t imagine Blake would ever choose anyone over him. But Blaine is a great rock vocalist and the two together gave a solid performance.

4. Johnny Rez vs. Nolan Neal (Team Adam): “Sledgehammer”
It must be tough going head to head with a four chair turn that is in his second season of the show, but Johnny holds his own against the more seasoned Nolan. Ultimately I don’t think the song choice did either of them many favors, but Johnny easily comes off as the more marketable and fresh voice of the two so I’m disappointed to see him go. I think Nolan will have a hard time sticking out in a genre and style becoming all too common on the show.

5. Halle Tomlinson vs. Belle Jewel (Team Alicia): “Bennie and the Jets”
It’s no surprise that Alicia chose Belle to move on through the battles, but what is surprising is that we didn’t get to see more of it. In terms of playful quirkiness I think Belle has it in spades and this popular Elton John track seems like the perfect fit for her style.

6. Dana Harper vs. Tarra Layne (Team Blake): “Alive”
In this shortened performance we get a quick snippet of why Blake chose Dana to move on — her deep, full voice is powerful enough to make an impression in just a few seconds. It’s a shame we didn’t get to see this battle in full because I’d really like to hear what Dana does with it.

7. Darby Walker vs. Karlee Metzger (Team Miley): “Brand New Key”
I like that Darby and Karlee asked Miley straight up why she paired them together because I think it’s one place where Miley is really struggling. None of her battles are really striking me as duets that make sense. For this one, Darby and Karlee both fit the quirkiness of the song, but their performance styles are so strikingly different — Darby with confidence and spunk, Karlee more reserved and subtle — that the battle falls pretty flat overall. Darby is a clear winner based purely on personality, but it’s no surprise that Blake steals Karlee after a solid, if not surprisingly country vocal.

8. Christian Fermin vs. Gabe Broussard (Team Blake): “The Reason”
I get that it’s generally tough to find songs well-suited for teenage artists to sing, but what a dreadful choice for these two. Look, both sounded perfectly fine and Christian was as pitch perfect as advisor Bette Midler said he was, but I think it was hard to connect with either through this performance. Gabe moves on because his age is a talking point that has potential to help him progress farther than Christian will.

9. JSoul vs. Simone Gundy (Team Adam): “You’re All I Need to Get By”
Of all the shortened performances, this one was the hardest to get a grasp of what the artists accomplished in their battle. In terms of potential based on what we already know of them, I’m glad Simone is moving on.