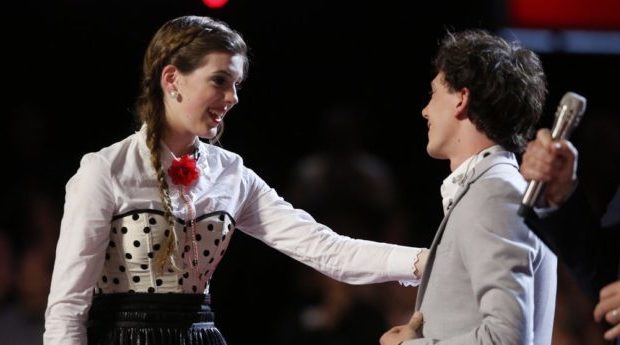 We are down to the final nine artists on the 10th season of “The Voice,” and there have been some amazing performances while other moments left us scratching our heads. Despite all of their accolades and years in the business, coaches Blake Shelton, Christina Aguilera, Pharrell Williams, and Adam Levine are bound to make some terrible, horrible mistakes along the way, right?

Whether it is song choices, who gets paired up for battles and knockouts, or who they end up saving in the end, the coaches have a lot of pressure to steer their team in the best direction they see fit.  But here are my top five mistakes made this season. Do you agree or disagree? Let us know who you think made the biggest mistake of the season in the comments section below.

‘The Voice’ Power Rankings for the Top 9

1. The Viewers vote off Emily Keener
Surprise! Despite mistakes the coaches are destined to make throughout the season, the biggest mistake of the season so far was made by YOU! The viewing public. Emily Keener of Team Pharrell was one of the most interesting, unique artists of the season. After giving a beautiful throwback performance of “Still Crazy After All These Years” in the live playoffs, viewers did not vote her through, and Pharrell had to save her. In the top 12 after delivering an absolutely captivating performance of “Lilac Wine”, she landed in the bottom two where she eventually lost the “instant save” to Owen Danoff of Team Adam. Keener should have been a finalist, but we sent her home first. We made the biggest mistake of all this season.

2. Team Pharrell song choices in live playoffs
As the first week of live performances kicked off, one team was noticeably at the bottom or off the iTunes charts completely: Pharrell’s. The coach of season eight champ, Sawyer Fredericks, was way off the mark when choosing songs to best represent his artists. Devastating choices for former frontrunners Caity Peters (“I’ll Be Waiting”) and Moushumi (“Love Yourself”) sent both home much earlier than expected. Even Hannah Huston and Daniel Passino, who advanced by public vote, were well behind on the charts in comparison to other teams. If there hadn’t been a rule that three from each team advance to the top 12, this would have been an absolute massacre of Team Pharrell.

3. Blake’s song choices for Mary Sarah
Mary Sarah’s journey on “The Voice” has been nothing if not a bit confusing. After her blind audition of “Where The Boys Are,” I thought she would easily skyrocket to frontrunner position as the ideal pretty, blond country artist we’ve seen time and time again. But since then her song choices have seemed to actively pull her off that pedestal. In the live playoffs she performed a dismal version of “Rose Garden,” which did poorly on iTunes but she was voted through anyways. Her next performance was a “ho-hum” version of “Johnny and June” which really went nowhere. She finally seemed to go in the right direction with “Stand by Your Man” in the top 10, but WOW it has taken her a long time to choose the right song. For an artist who could be considered a frontrunner at this point, she remains in the middle of the pack due to nothing more than terrible choices.

4. Christina chooses an Aretha Franklin song to showcase her only country singer
Christina loves her divas-in-training but there have been times she takes it too far. The biggest injustice this season was assigning aspiring country star Kata Hay, one of Aretha Franklin’s biggest hits – “Natural Woman” – when competing for viewer votes for the first time. At a time she should have been catering to her country fan base, she was sent in a completely different direction, leaving her out of the top three on Team Christina – and sent home early.

5. Pharrell chooses “I Don’t Want to Miss a Thing” for Daniel Passino
Pharrell prides himself on letting his artists be themselves. This allows unique artists to showcase their abilities and be true to their artistry, which is why many choose him as a coach. In the case of Daniel Passino, however, this coaching style did not work. Passino needed guidance in which direction his artistry would flourish. The classically trained vocalist turned pop singer was probably most impressive in his blind audition of “Marvin Gaye.” After that, it was a roller coaster that all went up in flames when he was given this rock, power ballad. The song was outside of his range and all wrong for his singing style – leading to his elimination in the top 10.