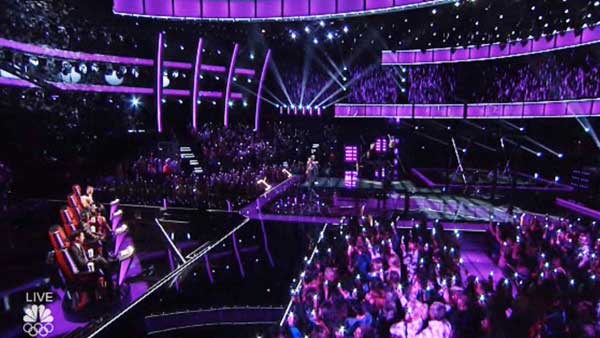 “The Voice” opened Monday with a heartfelt tribute to Prince. Noting that the stage was bathed in purple lighting (the signature color of the late singer/songwriter), Carson Daly said, “As you can tell, things look a little bit different tonight. As everyone knows, the world lost an undeniable music icon a few days ago with the passing of Prince.” He continued, “Coaches, we thought that we’d take a few minutes here at the top of the show, as a show that cares so much about music, to talk a little about your appreciation for him.”

[PHOTOS] ‘The Voice’ winners: See complete list of past champs

Adam Levine, lead singer of Maroon 5, spoke of his long-time admiration for Prince calling him “one of the most profound musical influences on me, personally. The whole world felt his presence always.” As Levine noted, “He did things his way, always, until the end. And I just have a lot of respect for someone who is able to continue to make amazing music and never changing anything about who he was. That’s inspiring. ”

An emotional Pharrell Williams recalled, “When that ‘Purple Rain’ album came, it played in that apartment complex for the rest of the summer. That’s all my childhood. I will never forget what ‘Darling Nikki’ felt like. I will never forget ‘I Would Die 4 U’ feels like.”

‘The Voice’ Top 11:
Laith Al-Saadi was best performer Monday but who was worst?

Christina Aguilera declared, “Prince will always be such an inspiration for every generation to come and music. It’s so fascinating and so amazing to listen to his genius on record. So many songs, no matter what, what age, what era, it would be a hit. That’s a true sign of somebody that’s timeless and legendary.”

Blake Shelton revealed, “I wish I would have had a chance to meet Prince. I can only speak of him like a fan, like most of us. His music still, to this day, can change my day. It changes my mood every time I hear it.”