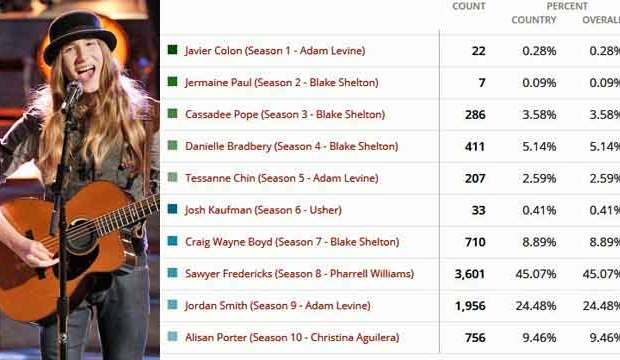 With almost 8,000 people voting in our latest poll, your runaway choice as the favorite “The Voice” champion of all time is Sawyer Fredericks. The young singer-songwriter won the NBC reality program last spring during the eighth season for coach Pharrell Williams, a Grammy Award winning Producer of the Year. He received 45.07% of all votes among the winning artists from the past 10 seasons (see chart above).

In second place is velvety crooner Jordan Smith with 24.48% of the votes. He prevailed for the ninth season and was coached by Maroon 5 founder Adam Levine. The third spot is held by Alisan Porter with 9.46% of support. The former child actress, won the 10th season of “The Voice” earlier this week for coach pop sensation Christina Aguilera.

Click here to take a tour through our photo gallery featuring all 10 winners of “The Voice.” Be sure to make your Emmy predictions right here. You’ll compete to win our contest prizes for best picks — $500 (first place), $300 (second place) and $200 (third place) in Amazon gift certificates — a place of honor on our leaderboard and a starring role in next year’s Top 24 Users (the two dozen folks who do the best predicting this year’s Emmy nominations). Be sure to read our contest rules.