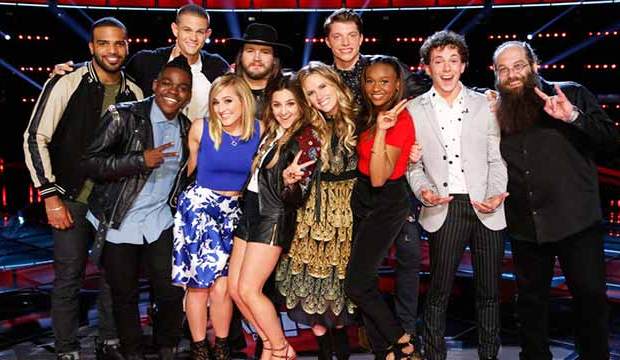 Have you already decided who will win “The Voice” for this 10th season on NBC? Coaches Adam Levine, Blake Shelton, Christina Aguilera, and Pharrell Williams plus the home audience have narrowed down the field to the Top 11 artists. We now ask you to vote in our new poll (see below) about who will be the champ for this season.

As a reminder, here are the rankings from our contributing writer John Benutty following last week’s elimination show. The Top 11 will perform Monday night on the Emmy-winning reality program with one contender eliminated this Tuesday.

1. Alisan Porter (Team Christina)
Like my fellow writer Denton Davidson said last week, there’s no denying that Porter is the frontrunner, once again receiving the strongest remarks from all four coaches. In one of the most telling comments, Levine said that each season there’s one artist that rises above the rest as the perfect example of what the show is about, and that this season that artist is Porter. I agree and iTunes sales suggest the voting audience does, too.

2. Adam Wakefield (Team Blake)
While far from my personal favorite, it’s hard to argue that Wakefield isn’t hot on Porter’s tail for frontrunner status. If the strength of his iTunes sales isn’t enough, there’s also the general sense that he appeals to the core demographic of an audience that has produced multiple Blake-coached, country-singing finalists in past seasons.

3. Hannah Huston (Team Pharrell)
Huston’s performance of “Something’s Got a Hold on Me” this week absolutely shook me. I had a lot of faith in her before, but now I’m solidly in her corner. I think she’s one of the most reliable singers in the competition and will continue to surprise with her soulful understated style.

4. Shalyah Fearing (Team Adam)
Without a doubt the best dark horse bet, Fearing continues to impress with her mature performances of songs with huge degrees of difficulty. She’s young and has a lot of growth ahead of her, but that’s also what makes rooting for her so exciting.

5. Daniel Passino (Team Pharrell)
After being brought back to join the live rounds, Passino could have easily faded into the background. But he’s been voted through by the audience twice in a row now, and as Pharrell pointed out on Monday night, he seems to have found new confidence that is making his performances better.

6. Laith Al-Saadi (Team Adam)
If Wakefield wasn’t in the competition, I think Al-Saadi would be soaking up all the love that viewers have for the dependable classic rock, slightly country singer. He has the talent and interesting look/personality that in any other season could make him a winner. Here he’s safely in the middle for now.

7. Nick Hagelin (Team Christina)
For me, Hagelin is not as good as his teammates or the singers on other teams, but his personal story and his charming good looks help make him more appealing to viewers. He performed decently on the iTunes chart and has been voted through twice now so there’s definitely a chance he can make it through a few more weeks.

8. Paxton Ingram (Team Blake)
Somehow even with the lowest chart position, Ingram still managed to make it through after the votes were tabulated. I think what’s working in Ingram’s favor is the unusual pairing of him and Blake, which is a relationship viewers may want to see more.

9. Bryan Bautista (Team Christina)
Bautista was called safe pretty early into this week’s episode which could suggest that he was one of the highest scorers. I don’t feel though like he can win, even if he lasts a few more weeks and gives a really great performance next week. The other guys in the competition are just more interesting as performers.

10. Mary Sarah (Team Blake)
For whatever reason, Mary Sarah doesn’t seem to be connecting with an audience that only last year voted a similar singer from Team Blake to 2nd place. I think she’s simply being outshined by her teammates. Any loyalty to Blake is being spent on them instead of her.

11. Owen Danoff (Team Adam)
Honestly, Adam’s heartfelt pleas to save Danoff can and should only go so far and I can’t help but suggest that he should not have been saved this week considering it sacrificed Keener. Adam had to personally save him last week, and the public needed to do the same on Tuesday. Up against anyone else for the save next week, Danoff definitely goes home.