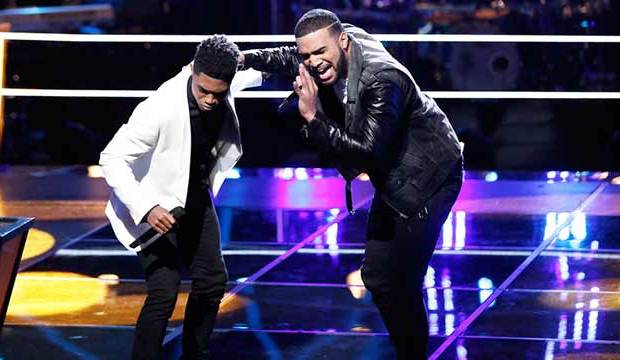 In honor of the 10th season of “The Voice” reaching its Top 10 show this Monday, we now offer you a ranking of the season’s 10 best performances. Below you’ll find my list that includes performances from many stages and from each team coached by Adam Levine, Blake Shelton, Christina Aguilera, and Pharrell Williams (click any name below to see the performance).

We include some eliminated singers and artists still going strong in the competition. A few of the performances were breakthroughs for the artists, and some exemplify a consistently solid body of work. Agree or disagree? Sound off below in the comments section.

Photo Gallery: See complete list of past “The Voice” champs

1. Bryan Bautista vs. Malik Heard (Team Christina) – “It’s a Man’s Man’s Man’s World”
The battle round is an interesting stage of the competition because the artists are judged on their individual performance within what is essentially a duet with their competition. For me, these performances are rarely enjoyable and are often disjointed and unevenly matched. Bautista and Heard’s performance however transcended all the limitations of the format, and together they created the season’s single best performance, a cohesive and compelling duet from start to finish.

2. Shalyah Fearing (Team Adam) – “Listen”
Flying under the radar up until that point, Fearing had the first major breakthrough moment of the season when she performed Beyonce’s “Listen” in the first week of the live playoffs. Seemingly maturing on stage, Fearing went from cute teenager still in the competition to dark horse contender with this powerhouse vocal.

3. Alisan Porter (Team Christina) – “Stone Cold”
Aside from her obvious talent, Porter’s strongest asset in the competition is her personal story of overcoming addiction. While she’s given many great performances so far, it’s her rendition of “Stone Cold” in the second week of live playoffs that brought together ability and story with the emotional resonance that every artist strives for.

4. Laith Al-Saadi (Team Adam) – “Make It Rain”
When Al-Saadi closed out the third week of live playoffs with Ed Sheeran’s “Make It Rain,” it felt as if half the audience was finally paying attention to him for the first time. Existing somewhere in the middle of the pack up until this week, Al-Saadi had yet to prove that he could actually win. But whatever happens, when all is said and done this will prove to be one of the most memorable performances of the season.

5. Moushumi (Team Pharrell) – “Wicked Game”
When Moushumi closed out her blind audition of “Wicked Game,” I honestly thought she was likely to make it all the way to the finals. Unfortunately she failed to match the high bar she set so early and was eliminated before the top 12. But here Moushumi’s breathy, rock-tinged vocals are perfectly matched to the song, creating the most uniquely inspired performances of the season.

6. Adam Wakefield (Team Blake) – “Tennessee Whiskey”
In his blind audition, Wakefield set the tone for what has proven to be a very consistent and clearly focused artistry. Perfectly blending the country and rock sides to his voice, “Tennessee Whiskey” is not only Wakefield’s best performance, but also the season’s best country performance.

7. Emily Keener (Team Pharrell) – “Lilac Wine”
It’s admittedly odd that I’m asking you to consider the performance that ultimately got Keener eliminated from the competition as one of the season’s best. But I think it highlights one of the pitfalls of the reality TV singing competition genre overall. All too often intimate performances go unappreciated by the voting audience because they don’t scream “look at how great and powerful my voice is” in the same way that huge anthems do. But great singing is great singing and with this performance Keener showed that she’s a true artist.

8. Team Pharrell – “Don’t You Worry Child”
In the same way that the battle rounds often come off as muddled, so too do the group performances when entire teams take the stage together on results night. In the first week of live results, though, the artists of Team Pharrell showed that harmony can be found even among six very different singers.

9. Paxton Ingram (Team Blake) – “Dancing on My Own”
Ingram has had the most interesting journey of the season. The partnership of him and coach Shelton may even go down in show history as one of the most surprisingly successful. It was early in Ingram’s blind audition that Blake first felt connected to Ingram’s talent and with good reason — Ingram finessed a pop dance track into a soft-toned, melancholic ballad with inspiring ease.

10. Daniel Passino (Team Pharrell) – “When I Was Your Man”
Despite his placement in the bottom two this week, I believe Passino to be one of the most talented vocalists still in the competition. He has honed his artistry into a clear vision of the type of career he wants and never has that been more clearly explained than in this performance. His voice stays smooth as he moves about the stage like his idols Michael Jackson and Justin Timberlake.