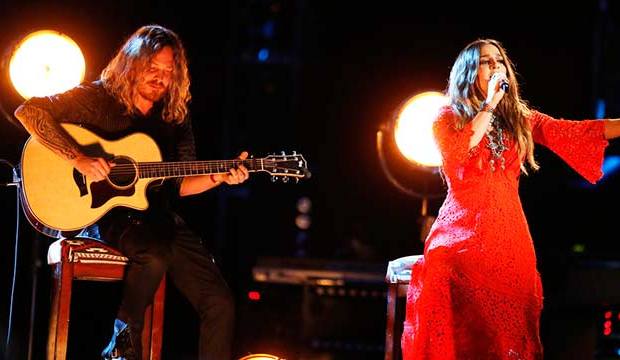 The top 10 artists performed on “The Voice” Monday night, but who was the best? It was close near the top, but my overall favorite of the night was Alisan Porter. Could her mentor Christina Aguilera become the first female coach to win it all? Or will artists from the teams of Blake Shelton, Adam Levine, and Pharrell Williams spoil a potentially historic moment?

Who else is in my rankings of the top five artists on Monday’s episode of the Emmy-winning NBC reality program? These choices are based strictly on these individual performances, not past shows or iTunes sales. If things continue the way they did tonight, each coach could have an artist in the final four. On a more negative note, click here for my Bottom 5 from Monday’s show.

Do you agree or disagree? Sound off in the comments below.

1. Alisan Porter (Team Christina) – “Let Him Fly”
Porter was in a league of her own tonight, delivering absolutely perfect vocals in this stripped down and emotional cover of a Patty Griffin classic. When Porter chooses her songs, she is right on target and Christina should take note. Although she can hit all the big notes of any soul song she is given, she has been at her most believable when covering the likes of Linda Ronstadt, Joni Mitchell, and now Griffin.  She’s the most versatile vocalist of the season and this song proved that hitting the highest notes is not what makes her the best singer. She remains the one to beat.

2. Adam Wakefield (Team Blake) – “I Got a Woman”
This Ray Charles classic was the perfect song choice for a country-soul singer like Wakefield. His vocals were on fire throughout the intro of the song. As the tempo picked up, his voice continued to impress, but while he exceeds vocally, he lacks charisma. I still consider him a legitimate threat to win it all. He is an incredible musician and singer – and if he can harness some “star power” into that equation he will be tough to beat.

3. Laith Al-Saadi (Team Adam) – “The Thrill is Gone”
Nothing could pair better with Al-Saadi’s gravely vocals and ferocious guitar skills than a B.B. King classic like this. Vocals aside, there is not a more interesting musician on the show. His guitar skills are top notch, fun to watch, and take his performances to another level. He’s looking more and more like a finalist each week.

4. Hannah Huston (Team Pharrell) – “Rolling In the Deep”
Delivering her best performance in weeks, Huston finally gave a performance worthy of a potential finalist. The song choice was key here, and allowed her to deliver easy, clear, powerful vocals without too much struggle. She will easily move forward with this performance.

5. Mary Sarah (Team Blake) – “Stand By Your Man”
I liked her approach singing the first part of the song in her lower register, as her voice is naturally high-pitched. Coach Shelton continues to throw older songs at her, and it works to a point, but she has yet to produce a true standout performance. She’s consistently in the middle of the road, when she could easily be delivering performances that land her on the top. Her best performance was still her blind audition of “Where the Boys Are.” Perhaps she should go back to old-school pop instead of country.