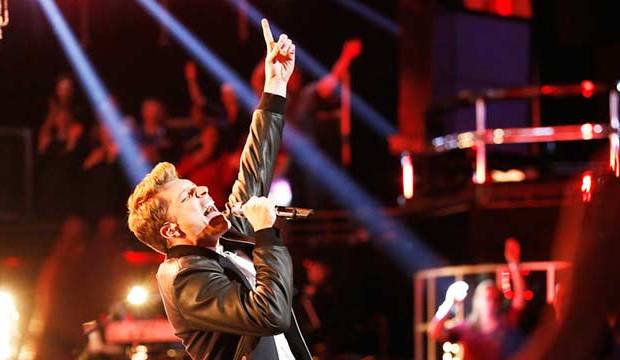 Even a Top 10 performance night for “The Voice” means there were five artists we must consider the worst. Monday night’s episode was no exception, and we must unfortunately declare that the bottom of the pack was struggling Pharrell Williams’ team member Daniel Passino. After landing in the bottom two last week, Passino needed to step his game up and he failed to do so in a big way – meaning he will likely be in trouble once again.

For a show that rarely has any coaches offering major criticism, Blake Shelton, Adam Levine, and Christina Aguilera had no trouble bringing up his weak spots. He could very well be fighting for his life again on Tuesday, hoping for an “instant save” from the home audience against whoever falls into the bottom two slots with him.

Who else is in my rankings of the worst five artists on Monday’s episode of the Emmy-winning NBC reality program? These choices are based strictly on these individual performances, not past shows or iTunes sales. On a more positive note, click here for my Top 5 from Monday’s show.

Agree or disagree with my rankings? Sound off in the comments below.

6. Paxton Ingram (Team Blake) – “It’s All Coming Back to Me Now”
Nothing shocked me more than Ingram covering Celine Dion. Who would have guessed he could pull this off? This guy just keeps pulling out surprises and pulled off a pretty moving performance when I was just waiting to roll my eyes. He couldn’t quite reach the power notes at the end, but overall his performance was memorable and dynamic. He’s the most improved singer this season.

7. Nick Hagelin (Team Christina) – “I Can’t Help It”
Hagelin continues to improve each week and this was no different. The classic Michael Jackson song was right in his wheelhouse as he confidently worked the stage, delivering falsetto vocals with ease and exuding star potential. He isn’t the type of singer who can win the championship, but he should advance to next week.

8. Shalyah Fearing (Team Adam) – “My Kind of Love”
After singing inspirational ballads week after week, this gritty R&B number was a refreshing sound for Fearing. She needed to break out with something different this week and she delivered with a somewhat emotional performance, finally showcasing where her potential could lie as a recording artist.

9. Bryan Bautista (Team Christina) – “Promise”
Making a bold move and singing half a song in Spanish was smart, perhaps engaging a new audience and showing a different side of himself. Unfortunately he was off-key throughout much of the performance. His charisma remained intact, but it may not be enough to keep him out of the bottom of the pack when votes come in.

10. Daniel Passino (Team Pharrell) – “I Don’t Want to Miss a Thing”
Choosing an Academy Award-nominated, wildly successful hit penned by Diane Warren probably sounds like a slam dunk to a young artist looking for votes. With this performance, Passino proved why singers are as important as songwriters. He managed to turn an Aerosmith classic into one of the most vanilla, boring orchestrations we’ve heard all season – all while being completely off-key.