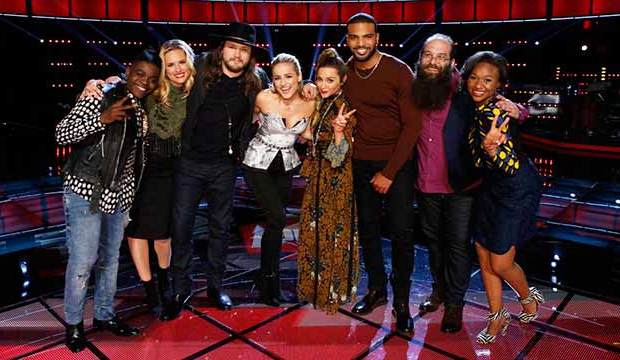 Are we in for a major upset on season 10 of “The Voice”? For weeks it seemed obvious that Alisan Porter would be Christina Aguilera’s first artist to win it all. She was dominating on iTunes and nailing every performance. But after a stumble this week, it seems like she may be more vulnerable than we thought.

Strong showings from Adam Levine’s Laith Al-Saadi and Blake Shelton’s Adam Wakefield in recent weeks have made them the surprising new leaders. Also coming on strong is Pharrell Williams’ lone contender left in the race, Hannah Huston. All four artists topped Porter on this week’s iTunes chart, along with her own teammate Bryan Bautista.

Have we seen a shift in power? Here are my current power rankings going into the Top 8 show next Monday. Remember that this is a critical week where four artists will move on to the finale and the other four will be swiftly eliminated on Tuesday.

Do you agree or disagree with our power rankings this week? Sound off in the comments below.

“The Voice” Top 9: Best performer this week was Hannah Huston

1. Adam Wakefield (Team Blake)
We’ve seen a shift on iTunes and the current leader among Voice contestants is Wakefield. The coaches also seem to be loving his performances. All three male coaches gave his rendition of “Love Has No Pride” a standing ovation. Aguilera was the only coach not to stand, and in return, the guys declined to stand after Alisan Porter’s performance. Are the coaches officially at war? Regardless, Wakefield also seems to be resonating with viewers and attracts fans of rock and country alike. I believe he is in a strong position to win it all, although he still lacks charisma to me.

2. Laith Al-Saadi (Team Adam)
Others have been praising Al-Saadi for weeks, but I was certain he had lost it and the Southern rocker wouldn’t get anywhere near the finals. Well, I was wrong. His performances have been consistent and his musicianship is fun to watch.  Levine has also proven to be the most calculating, strategic coach when choosing songs that will resonate with viewers. Al-Saadi has gone from dark horse to frontrunner, and it should not come as a surprise if he is this season’s champ.

3. Alisan Porter (Team Christina)
She has been the frontrunner all season long, and I think she is experiencing a backlash. Once dominant on the iTunes charts, this week she found herself in 6th place out of 9 contestants despite an exciting, powerhouse performance of an Aerosmith classic. Viewers may be tiring of her frontrunner status, but I’m hopeful they will rally behind her going into the finals. She truly is the most deserving winner this season.

4. Mary Sarah (Team Blake)
There’s just something about Mary Sarah. I can’t explain it since I’ve never been moved by her. But her performance on iTunes and the fan base she has been able to stir up is undeniable. I can foresee a scenario of her and Team Pharrell’s Hannah Huston battling it out for the final save to earn a spot in the top four. In this scenario, I see Mary Sarah’s strong country fan base saving her, giving her a slot in the finale.

5. Hannah Huston (Team Pharrell)
Huston has remained on the cusp of frontrunner status all season. Although she’s consistently in the mix on iTunes, she has yet to lead the way among the show’s contestants. That being said, with the perfect song choice and the perfect performance, Huston has potential to cause an upset going into the finale. Do not completely write her off just yet.

6. Bryan Bautista (Team Christina)
Bautista is a highly underrated vocalist who peaked recently with his “1+1” performance. He could potentially be the biggest star of anyone in the competition if given a record deal and star treatment. He has the looks, the charisma and the voice. But that’s not all it takes to do well on a reality singing competition. His story just isn’t quite as compelling as some others, and R&B just doesn’t have the biggest fan base when it comes to convincing the public to vote. He would make the top four if it was up to me, but in all likelihood his run will end next week.

7. Shalyah Fearing (Team Adam)
Fearing hit her stride in the live playoffs and the weeks that followed, but since then the magic in her performances just hasn’t been there. Her last few song choices just haven’t seemed that special and she’s lost her status near the front of the pack. It’s been fun watching her progress this season (she’s only 16 years old), but I don’t think the odds of making the finale are in her favor.

8. Paxton Ingram (Team Blake)
Ingram has a likable personality and it’s been fun to watch him grow as a performer throughout the season. He narrowly escaped elimination by defeating Team Christina’s Nick Hagelin by less than 100 tweets for the instant save. Despite Ingram’s personality and megawatt smile, the chances of him surviving the four-person elimination next week have to be next to nothing.