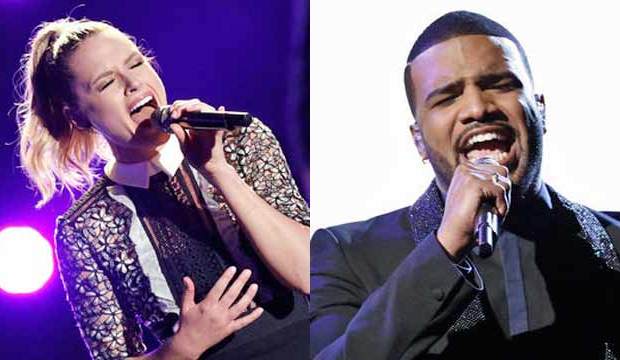 It’s the semifinals and that means we say goodbye to half of the Top 8 this week on “The Voice.” Two weeks ago there were two clear frontrunners in Alisan Porter and Adam Wakefield, but the most recent performances the past two Mondays found both Hannah Huston and Bryan Bautista have stepped up their games to challenge them.

Check out my rankings of this week’s performances for coaches Adam Levine, Blake Shelton, Christina Aguilera, and Pharrell Williams below and speak up in the comments. Where did I get it right and where am I wrong? Remember these are not my season rankings or based on the all-important iTunes sales. This listing #1-8 is strictly based on Monday evening’s show.

1. Hannah Huston (Team Pharrell) – “When a Man Loves a Woman”
Wow, the slow march of the music from nothing at the start to a whole lot at the end was the perfect decision! It not only changed this well-worn song into something new but let Huston’s voice take center stage. The growl and the rasp throughout were so utterly perfect. Something comes alive in Huston when she sings, and I’m in love.

2. Bryan Bautista (Team Christina) – “Hurt”
A couple of weeks ago I complained that Bautista was picking songs devoted to the women in his life, which I think created a disconnect with the audience. This week he chose something that meant something to himself and finally I felt drawn in. Agreement with Christina saying he has shades of Luther Vandross on this track. A stunning performance.

3. Alisan Porter (Team Christina) – “Desperado”
The reason Porter has been so wildly successful on the show is because she has consistently chosen songs that she connects to personally. That reinforces the journey she’s on as a mother and as someone in recovery. She’s a total package and that has never felt as right as in this performance. I loved it.

4. Adam Wakefield (Team Blake) – “I’m Sorry”
The best advice of the night was Blake and special adviser Pink convincing Wakefield to perform this alone from behind the piano. This was a big moment for him in a run on the show that has had many before it. Definitely the most I’ve ever connected with him as a vocalist.

5. Shalyah Fearing (Team Adam) – “And I Am Telling You I’m Not Going”
There’s no doubt that Fearing performed this song well, but whether or not such a well-known song done in such a standard way will connect with the audience is something I’m not so sure of. Where Fearing struggles is communicating exactly what type of artist she will be in the marketplace.

6. Mary Sarah (Team Blake) – “I Told You So”
I don’t think she has ever sounded better so it’s a shame someone in production decided to hide her behind barely see-through curtains for most of the performance. It was a barrier between the audience and her at the song’s most tender moments. I think it was a mediocre showing overall.

7. Paxton Ingram (Team Blake) – “I’d Do Anything for Love (But I Won’t Do That)
In the calmer moments at the beginning, I think Ingram hit this one out of the park. The chaotic rock concert parts, including the clunky camera tricks, were messy and unsuccessful. I would have liked an entire ballad version of it instead.

8. Laith Al-Saadi (Team Adam) – “One and Only”
I admire that Al-Saadi wanted to do something more contemporary and to step outside the genre he’s comfortable in, but this was a total miss. If anyone thinks it was a good performance it isn’t because of the vocal, it’s because they’re firmly in his corner and/or are impressed by the risk he took.