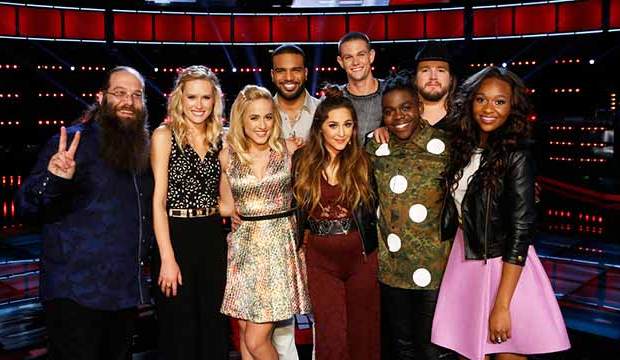 Is there any doubt at this stage who the top four artists are for this 10th season of “The Voice”? You may debate the order of those four people, but there is little question they will be competing for the championship. All of them are performing quite well on the iTunes sales charts and have been making excellent song selections.

Along with that quartet, here are our current power rankings for the Top 9 episode slated for next Monday, May 9. If our top choice prevails, it will give Christina Aguilera the first championship for a female coach. Will she be able to hold off challenges from previous coaching champs Adam Levine, Blake Shelton, and Pharrell Williams?

Do you agree or disagree with our power rankings this week? Sound off in the comments below.

1. Alisan Porter (Team Christina)
Porter has touched on her emotional journey every week and continues to pick songs that simultaneously speak to that, are in her vocal wheelhouse and are broad enough to mean something to the audience, too. I mean, in what world does she lose this season?

2. Laith Al-Saadi (Team Adam)
Adam must actually be the best coach because he plucked Al-Saadi from the bottom of the pack and set him down as a frontrunner in the last two weeks, much like he did with Fearing a couple of weeks ago. Al-Saadi is not only safe next week, but probably every week until the finale.

3. Adam Wakefield (Team Blake)
Wakefield has been a frontrunner all season long. His voice isn’t offensive, his song choices are always on point, and the show’s audience loves country and rock equally. He checks every box every week and shows no sign of slowing down.

4. Mary Sarah (Team Blake)
Been saying it for weeks, but Mary Sarah should not be underestimated. The “female country artist on Team Blake” is a niche that this show’s audience loves. And it’s a large enough niche that have sent many like her to the finals before.

5. Shalyah Fearing (Team Adam)
As the only female R&B artist still on the show, Fearing has no direct competition for the votes of the audience that like her style of music. For that reason, and because of her unimpeachable talent, Fearing is safe next week.

6. Hannah Huston (Team Pharrell)
There’s something in Huston that tells me she could actually win, but I don’t think she’s found it quite yet. She’ll need a huge moment next week if she’s ever going to surpass the other artists and get to the finals.

7. Paxton Ingram (Team Blake)
Ingram had a breakout moment last week, and though he did well this week I think it was still like taking a few steps back. The truth is he’s outmatched by the competition and is riding in the middle of the pack.

8. Nick Hagelin (Team Christina)
Hagelin finally found a song in “I Can’t Help It” that fits the type of artist he should aspire to be. The reality is that he’s the weakest vocalist left and should be the next to go. That being said, his charm and personal story will probably keep him safe via a save yet again.

9. Bryan Bautista (Team Christina)
Christina needs to rein Bautista’s song choices in. His desire to choose songs that are essentially odes to specific women in his life is alienating to an audience that wants to feel connected to his music. I think the Spanish-language song was a really great moment, but he needs to broaden his reach to stay out of the bottom next week.