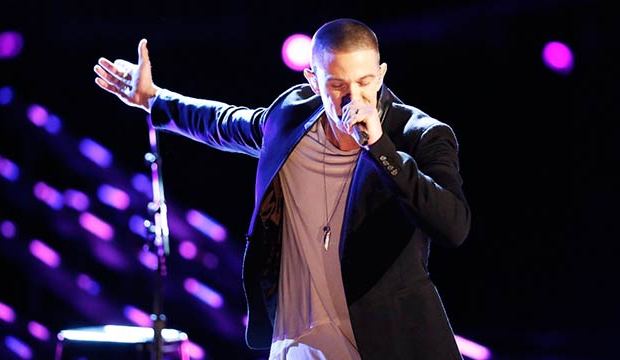 Coach Christina Aguilera still has all three of her artists remaining on “The Voice” this season, but that might be about to change. Just like last week, we once again have Nick Hagelin at the bottom of our rankings based on his performance for Monday’s episode. But don’t despair, Christina! We have both of your other artists positioned near the top of our power rankings (click here for that report).

For last Tuesday, Hagelin had to fight for his artistic life for an “instant save” from the home audience against Daniel Passino. He prevailed but might just find himself in the same position for this Tuesday’s results show. Who will he be up against from the teams of Adam Levine, Blake Shelton, or Pharrell Williams?

Here are my rankings of the bottom five singers from Monday’s show with any of these people potentially being in danger of elimination on Tuesday. This list is based strictly on these individual performances without regard to who is strongest in the competition overall. Agree or disagree with my rankings? Let me know in the comments!

5. Shalyah Fearing (Team Adam) – “A Change Is Gonna Come”
Fearing nails her performance this week despite a weird arrangement of the song. I would have liked to hear something closer to an acoustic version because there was a disconnect between the stylings of her voice and the backing orchestra. That being said, there is enough meat to her voice that Fearing still found her sweet spots within it.

6. Adam Wakefield (Team Blake) – “Love Has No Pride”
Wakefield is the most focused artist in the competition, always in control of the song and commanding attention with every note. This week is another solid addition to what he’s already given us this season, but it might be one of his least exciting, leaving me to wonder if it’ll hit the same heights on the charts that his other tracks did.

7. Paxton Ingram (Team Blake) – “I Wanna Dance with Somebody”
Like he did with “Dancing on My Own” in the blinds, Ingram took a popular dance track and stripped it down for great results. Though his vocal was a little uneven, I think Ingram succeeds in giving the audience the type of performance that is typical of any pop star, breathing new life into a song that would have felt boring if done as we’ve always heard it.

8. Mary Sarah (Team Blake) – “My Church”
This week Mary Sarah quadruples down on who she is as an artist — a mixture of traditional and contemporary country music. No doubt her fans are going to eat this one up, but for those of us waiting for her to give us something with a bit of crossover this one is too specifically country, leaving a lot to be desired.

9. Nick Hagelin (Team Christina) – “Hold On, We’re Going Home”
Hagelin never really found the tempo of the song though there were moments of clarity that showcased his voice in a really nice way. But this was so clearly a poor song choice for a singing competition and any energy that may have been felt in the studio was lost in translation through the television.