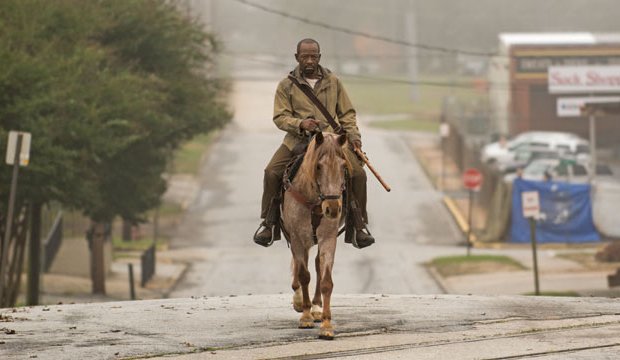 AMC’s “The Walking Dead” may be a ratings juggernaut, but in five seasons it only has two Best Prosthetic Makeup Emmy Awards wins to show for its 13 nominations. In 2011 the “Days Gone By” episode prevailed, while in 2012 it was the “What Lies Ahead” episode. Will the highly acclaimed sixth season bring the zombie series back into the Emmy spotlight? Based on the success of “The Walking Dead” at past ceremonies, as well as industry guild awards that share voters with the Emmys, here are seven key categories to watch for when nominations are announced July 14.

Best Drama Series
This is only the third year that Best Comedy and Drama will have seven nominees each, after last year when the nomination slots were increased and 2009 when there happened to be ties in both. The high number of slots — more than any other race — has meant that a nominee has gotten in each time without many other nominations to complement it. “How I Met Your Mother” (comedy, 2009), “Orange is the New Black” (drama, 2015) and “Parks and Recreation” (comedy, 2015) each had only three other nominations and two of each were in Creative Arts races. The nomination for “Big Love” as Best Drama Series in 2009 was staggeringly its sole nom that year.

“The Walking Dead” is positioned well to be the surprise addition this year, as it is the highest-rated scripted show on television, plus it has come close to a Best Drama Series nomination before. Its pilot episode won the American Cinema Editors Eddie Award for Best One-Hour Commercial Series Editing and was nominated at the Directors Guild for Best Drama Directing. Although “The Walking Dead” has not seen such high-profile industry nominations since its first season, it has consistently made an annual showing in the Emmy nominations, even posting a series-best tally last year of four for its fifth season.

Best Prosthetic Makeup
This is the only category that the Emmys have nominated “The Walking Dead” every season. That this category is one of the few that is open to all programs further demonstrates the strength of “The Walking Dead” here, as it has been listed on the ballot opposite not only other dramas, but also comedies, miniseries, movies, variety, reality and nonfiction. Finally, although Emmy favorites tend to fall off the radar in later years, “The Walking Dead” shows no sign of slowing down here, as it has won an industry award for its prosthetic work every season — the Emmy for its first two, then the Makeup Artists & Hairstylists Guild Award for its next three. In fact, these have been the show’s only wins from industry guilds in the last three years.

Best Drama/Limited/Movie Stunt Coordination
“The Walking Dead” received its first nomination for this Emmy last year after the academy opened up voting on this category to the acting branch, which immediately made the nominees more populist and in line with the Screen Actors Guild Award noms for Best Television Stunt Ensemble, for which “The Walking Dead” has been nominated the last four years. It is a shoo-in for a second Emmy nomination, especially since two of last year’s nominees — “Boardwalk Empire” and “Sons of Anarchy” — competed for their final seasons.

Best Series Sound Editing
“The Walking Dead” has been nominated for this Emmy four of five times, missing in the middle. However, sound editors are cooling on the show, as it has been on a downward trajectory at the Golden Reel Awards voted on by the Motion Picture Sound Editors, which overlaps members with the Emmys. It received four nominations including one win in 2011, three nominations including one win in 2012, two nominations in both 2013 and 2014, no nominations in 2015 and one nomination in 2016. Still, that is better footing than that of fellow incumbent nominee “Gotham,” which was shut out this year by the MPSE after a nomination last year for its first season.

Who died on ‘The Walking Dead’? Our contest leader predicts Glenn, Abraham or Daryl

Best Supporting Visual Effects
Like sound editing, “The Walking Dead” has only a missed a nomination here for its third season. Last year’s other nominees were “American Horror Story: Freak Show” (which won), “Boardwalk Empire,” “Gotham” and “Daredevil.”

Best Single-Camera Series Makeup
The Makeup Artists & Hairstylists Guild has nominated “The Walking Dead” for its non-prosthetic makeup the last two years. There is plenty of space for the show to break through this time around, as “Game of Thrones” and “The Knick” are the only Emmy nominees from the last two years that are still in contention.

Best One-Hour Sound Mixing
The Cinema Audio Society has nominated “The Walking Dead” four times, including the last three years, which makes it quite the statistical anomaly as the series has never been nominated for the equivalent Emmy, despite the voter overlap. “The Walking Dead” was actually the only one of last year’s CAS nominees not to be nominated for the Emmy; it was replaced by “Downton Abbey,” which characteristically does better at the Emmys than the guild awards, perhaps due to ineligibility. The CAS support shows that it is on the radar, so it may break in one of these years.