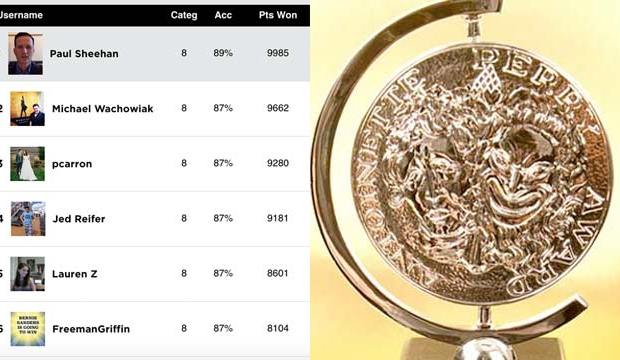 Congratulations to Gold Derby’s Paul Sheehan for an impressive 89% prediction rate for the 2016 Tony Awards nominations. (Click here to see where YOU ranked.) Of the eight categories we were predicting at Gold Derby, Sheehan only missed a single nomination — he forecast Nicola Walker (“A View from the Bridge”) for Best Actress (Play) instead of eventual nominee Laurie Metcalf (“Misery”).

“I made a mistake not including Metcalf in my Tony predictions for her performance in the stage version of ‘Misery,'” explains Sheehan. “After all, that role won Kathy Bates an Oscar and Metcalf, who is the sole nominee from the show, has pulled off this feat twice before (‘November,’ 2008; ‘The Other Place,’ 2013). I went with Walker instead thinking she would get swept along by all the love for ‘A View From the Bridge’; it got five nominations overall.”

So who decided that “Hamilton” merited a record-breaking 16 Tony Awards nominations while a trio of musicals warranted only one apiece? The 47 members of the nominating committee who attended all 36 shows that opened on the rialto this season met to cast secret ballots in 24 competitive categories. Playwright Stephen Karam had been on the committee but had to recuse himself when “The Humans” announced its transfer to Broadway.

The 70th annual edition of these top theater kudos will be handed out on Sunday, June 12 at New York’s Beacon Theater. They air live on CBS and will be hosted by “Late, Late Show” star (and past Tony champ) James Corden.