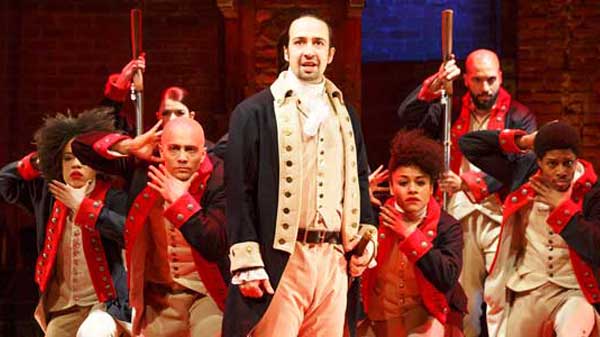 “Hamilton” is the biggest thing to hit Broadway in decades and will dominate the upcoming Tony Awards. During its Off-Broadway incarnation last season at the Public Theater, Lin-Manuel Miranda’s hip-hop musical about our controversial first Secretary of the Treasury, swept the New York Drama Critics Circle, Drama Desk, Outer Critics Circle, and Lucille Lortel awards. It is all but certain add the Tony Award for Best Musical to the collection and Miranda can look forward to taking home two Tonys for Best Score and Book. (While there is no spoken dialogue in “Hamilton,” other sung-through shows including “Cats,” “Evita,” and “Falsettos” have won the latter category.)

The author-composer, who previously a Tony won for his score of the 2008 Best Musical “In the Heights,” also plays the title role and is predicted to reap a Best Actor bid. That will make him one of only a handful of Broadway luminaries to receive multiple nominations for one show. Tommy Tune also netted three nominations for “My One and Only” while Bill Irwin and Liz Swados eared four apiece for “Largely New York” and “Runaways,” respectively. Trey Parker has them all beat as he won four Tonys for “The Book of Mormon,” claiming Best Musical, Director, Score and Book.

With “Hamilton” as the iron-clad favorite, which shows will fill the other three slots for Best Musical? We can eliminate “Allegiance” and “Amazing Grace,” both of which shuttered earlier in the season and featured scores by Broadway newbies. The former followed the travails of a Japanese-American family during World War II and the latter focused on the writer of the titular hymn, a slave trader who has a religious conversion and becomes an abolitionist.

Of the shows that have opened so far and are still running, that leaves “On Your Feet! The Story of Emilio and Gloria Estefan,” “School of Rock,” “Disaster!,” and “Bright Star.” “School of Rock,” featuring music by Andrew Lloyd Webber, lyrics by Glenn Slater, and a book by Julian Fellowes of “Downton Abbey” fame, is the strongest candidate, having received the most positive reviews of this quartet. Webber has won the top Tony for “Sunset Boulevard,” “The Phantom of the Opera,” “Cats,” and “Evita” while Slater was nominated for “Sister Act” and “The Little Mermaid.” The plot follows a wanna-be rock musician posing as a substitute teacher and forming a band with his elementary school kids.

“On Your Feet,” the jukebox bio musical of the Estefans and their creation of the Miami Sound Machine, comes up short compared to the similarly themed “Beautiful: The Carole King Musical” of two seasons back. “Disaster!” from Sirius XM radio host Seth Rudetsky and Jack Plotnick and “Bright Star,” the bluegrass musical from comedy legend Steve Martin and Grammy winner Edie Brickell, divided critics. “Disaster!” is a wild parody of 1970s thriller movies such as “The Poseidon Adventure” and “Earthquake” uses pop and disco songs of its era for a score had two previous Off-Broadway incarnations. “Bright Star” employs parallel plots to tell the soap opera story of a young woman with literary ambitions dealing with an unexpected pregnancy in the 1920s and her older self meeting a promising writer in the 1940s.

Four more musicals are set to open before the Tony cut-off date of April 28: “Tuck Everlasting,” “American Psycho,” “Waitress,” and “Shuffle Along or The Making of the Musical Sensation of 1921 and All That Followed.” That latter show is the most anticipated with a cast and creative team full of multiple Tony winners and nominees including Audra McDonald, Brian Stokes Mitchell, and Billy Porter, along with book and direction by George C. Wolfe and choreography by Savion Glover. The show is a hybrid of new production and revival, combining scenes from the original “Shuffle Along,” the first Broadway hit musical to be written, staged, and performed by African-Americans, and a behind-the-scenes storyline. Wolfe has two Tonys as a director (“Bring in da Noise, Bring in da Funk,” and “Angels in America: Millennium Approaches”) while Glover has one for his choreography of “Noise.” There was a hiatus in the preview period for rewrites and restaging which could spell trouble this close to opening.

“Tuck Everlasting,” “American Psycho,” and “Waitress” are all based on little-known films and don’t have a built-in audience. (Another new musical, “Nerds” about tech giants Steve Jobs and Bill Gates, didn’t even make it out of rehearsals, shutting down when a major investor withdrew.) “Psycho” did well in London, but its storyline of a corporate serial killer may be too grisly for Tony nominators. The score is by Duncan Sheik who won a Tony for his music for “Spring Awakening” while the book is by Roberto Aguirre-Sacasa whose only previous Broadway credit is the much-maligned “Spider-Man: Turn Off the Dark.”

“Waitress,” based on Adrienne Shelley’s 2007 film about a woman entering a pie-making contest to escape her unhappy, small-town life, garnered strong reaction during its preview at the American Repertory Theatre in Cambridge, Mass., particularly for the lead performance of Jessie Mueller (Tony winner for “Beautiful”). Director Diane Paulus has won a Tony for “Pippin” and been nominated for “The Gershwins’ Porgy and Bess” and “Hair” while book-writer Jessie Nelson and composer-lyricist Sara Bareilles are making their Broadway debuts.

“Tuck Everlasting,” adapted from the children’s novel about a little girl who encounters an immortal family, was well received for its out-of-town run in Atlanta. (“Tuck” has been filmed twice, in 1981 and 2002). Book-writer Claudia Shear has been Tony nominated for her play “Dirty Blonde” and her co-author Tim Federle has many Broadway credits as a performer. Director-choreographer Casey Nicholaw won a Tony for “The Book of Mormon” and been nominated an additional eight times.